Milestone in Vico Jugario, found on the occasion of the urban transformation works performed in the 1930s.

Since republican Rome period at least, the milestones ("miliaria" in Latin) were blocks or pillars of stone, often cylinder-shaped, usually located along the side of the public roads every thousand Roman paces ("mille passuum"), with the main aim of measuring the distances. Especially in Italy, the milestones probably signposted the distances calculated from the gates of the Servian Wall encircling the city of Rome. 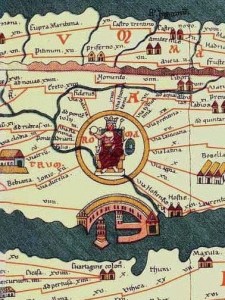 The city of Rome at the core of the Roman roads network, from the Tabula Peutingeriana, 1st-4th century AD. Facsimile edition by Conradi Millieri, 1887-1888.

A monumental milestone was erected by Augustus in the Roman Forum in 20 B.C., on the occasion of his appointment to the "Curator viarum" office. As reported by Cassius Dio (Historia Romana, 54.8, 4), this milestone had to be called the "Miliarium Urbis" even though it received the name of "Miliarium Aureum" (Golden Milestone). According to Plutarch (Galba, 24.4), all roads intersecting Italy were considered to finally lead to this monument, conceived as the ideal landmark linked to the whole system of Roman roads.

Later, in the twelfth century, the French theologian and philosopher Alanus ab Insulis (also known as Alain de Lille) wrote in the Liber parabolarum (591): "Mille viae ducunt homines per saecula Romam" which can be translated as "A thousand roads lead mankind forever to Rome", with reference to Christian pilgrimage. The well-known saying "All roads lead to Rome", which is commonly interpreted as "Different ways can lead one to the same goal", could have been originated from these considerations. One of the explanations of these sayings, appeared in such different forms, is the one which fascinates us the most: during its glorious history, Rome has been mostly contemplated as the heart of the Classical, then Christian and artistic world. 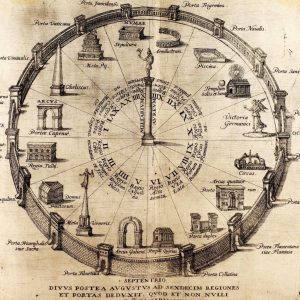 A 1602 image of ancient Rome from the Warburg Institute’s collection.

As the “Miliarium Aureum”, we imagine Milestone Rome website as a connecting hub at which all curious travelers could address in order to find new ways to explore Rome and deeply live unique fruition experiences relating to its culture and beauty. Thanks to our interdisciplinary and multicultural competencies as well as our primordial passion for art and the digital means to communicate it, we’ll do our utmost to bring excellence and innovation to the enhancement of Italian heritage, increasing knowledge, understanding and enjoyment towards Rome’s art history, museum collections and wide-ranging culture dating from the Ancient times up to the Modern era. We believe in the attempt to ensure that this treasure could be appreciated by the world citizens and therefore preserved for future generations, too.

This website uses cookies to improve your experience while you navigate through the website. Out of these, the cookies that are categorized as necessary are stored on your browser as they are essential for the working of basic functionalities of the website. We also use third-party cookies that help us analyze and understand how you use this website. These cookies will be stored in your browser only with your consent. You also have the option to opt-out of these cookies. But opting out of some of these cookies may affect your browsing experience.
Necessary Always Enabled
Necessary cookies are absolutely essential for the website to function properly. These cookies ensure basic functionalities and security features of the website, anonymously.
Functional
Functional cookies help to perform certain functionalities like sharing the content of the website on social media platforms, collect feedbacks, and other third-party features.
Performance
Performance cookies are used to understand and analyze the key performance indexes of the website which helps in delivering a better user experience for the visitors.
Analytics
Analytical cookies are used to understand how visitors interact with the website. These cookies help provide information on metrics the number of visitors, bounce rate, traffic source, etc.
Advertisement
Advertisement cookies are used to provide visitors with relevant ads and marketing campaigns. These cookies track visitors across websites and collect information to provide customized ads.
Others
Other uncategorized cookies are those that are being analyzed and have not been classified into a category as yet.
SAVE & ACCEPT