Today, Friday 27 March, in the empty Piazza San Pietro at 6.00 pm, pope Francesco will involve the spiritual presence of all Christian people around the world in an extraordinary prayer to end the coronavirus pandemic. On this special occasion, the 15th century crucifix miraculous in 1522 Rome plague, will be exposed together with the Late Antique sacred icon of the Virgin Mary entitled “Salus Populi Romani”. 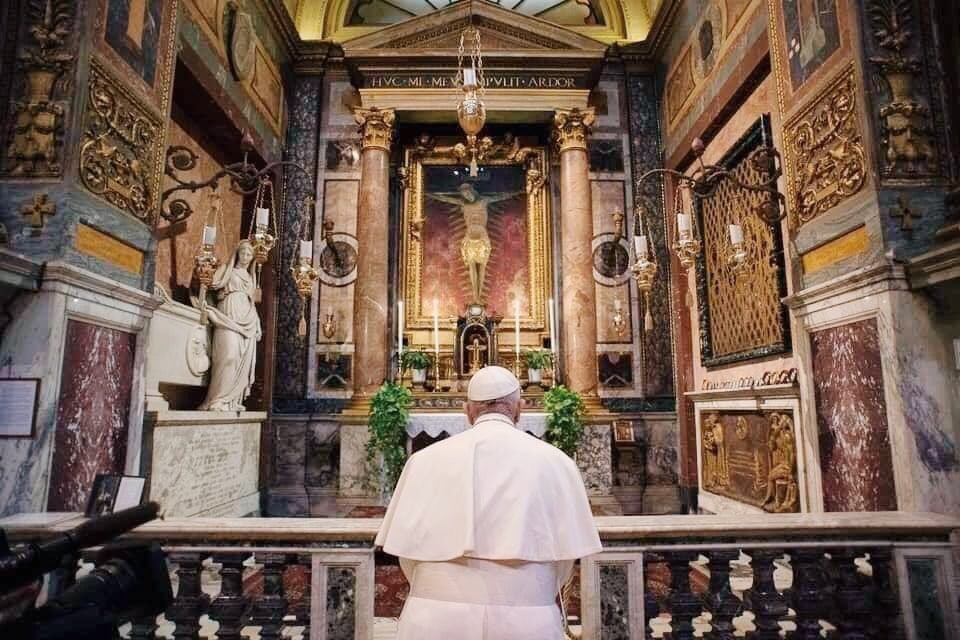 This extraordinary moment of prayer celebrated by pope Francesco will be broadcast live by Vatican Media throughout the world and can be followed in various languages on the Vatican Radio as well as on the Vatican News homepage, Facebook page or Youtube, where also a channel in sign language has been activated.

Pope Francesco has announced an exceptional and touching prayer to be held on March 27, at 6.00 pm in an empty Piazza San Pietro, in order to help Christians in finding the opportunity to live with hope and faith the present sad circumstance challenging all of suffering humanity and to invoke divine intervention to stop the frightening coronavirus pandemic.

Together with the Blessed Sacrament, the pope will give the “Urbi et Orbi” Eucharistic blessing and the possibility to receive the plenary indulgence, according to the conditions set out in the recent decree issued by Apostolic Penitentiary. 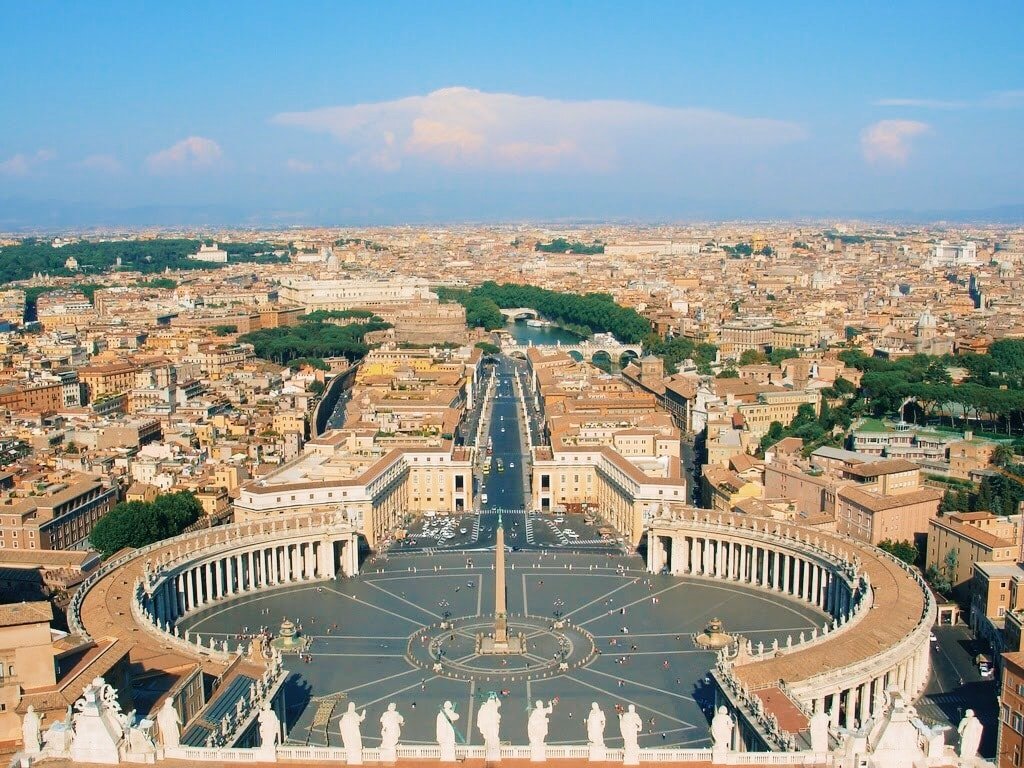 Piazza San Pietro viewed from the dome of the basilica di San Pietro in Vaticano. Photo by Nickel Chromo via Wikimedia Commons.

This moment of grace has to be welcomed as an extraordinary chance and a unique spiritual event, since the blessing with the Sacrament is usually celebrated only at the end of the Eucharistic adoration and the “Urbi et Orbi” blessing is only given on three occasions: the papal election, Easter’s and Christmas’ days.

The Apostolic Penitentiary’s decree particularly grants the plenary indulgence, which is the remission before God of the temporal punishment incurred by sins, to observants affected by coronavirus, relatives assisting them and worshippers praying for them. 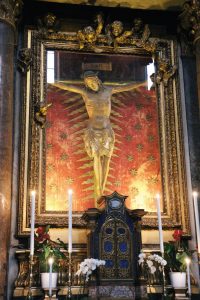 The wooden crucifix, venerated by pope Francesco on March 15, is located inside the homonym chapel (the fourth on the right) at the chiesa di San Marcello al Corso. Dating to the 15th century, it has deemed as miraculous since it survived intact after the fire which destroyed the church on the 22 May 1519. For this reason, it was brought in procession during the epidemic of plague affecting Rome in 1522, for 16 days, between August 4 and 20, at the end of which the pestilence was stopped. Therefore, the group of prayer called “Compagnia del SS. Crocifisso” (become Archconfraternity and moved in 1568 into the next Oratorio del Crocifisso) took charge of repeating the procession of the crucifix along the way between San Marcello and San Pietro for centuries.

Starting from the 17th century, the procession leading the crucifix to the Vatican basilica, where it was exposed to the worshippers’ adoration, became a tradition characterizing the Holy Year. The names of the popes and pertaining years of indiction are carved on the back of the cross. 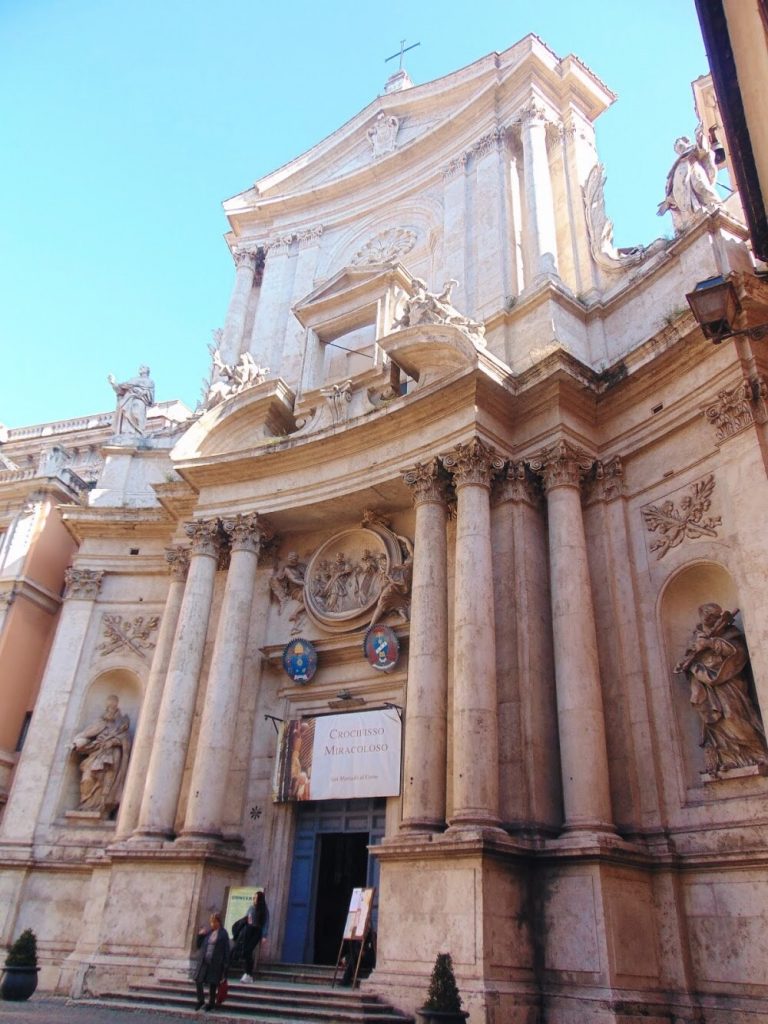 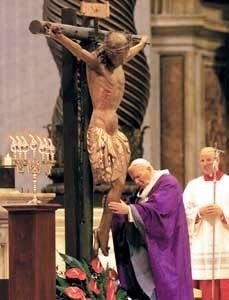 On March 26, the crucifix has been temporary moved to the Vatican for pope Francesco’s prayer, after 20 years from the previous occasion. That happened on the occasion of the first Sunday of Lent in the Holy Year 2000, on March 12, when Saint pope Giovanni Paolo II celebrated the “Day of Forgiveness” (also called “Day of Pardon”, in Italian: “Giornata del Perdono”), to publicly ask forgiveness for the faults that have stained the Church over the past. The image immortalizing Saint pope Wojtyla hugging the crucifix exposed on the altar of the basilica Vaticana still exerts all his strong emotion. 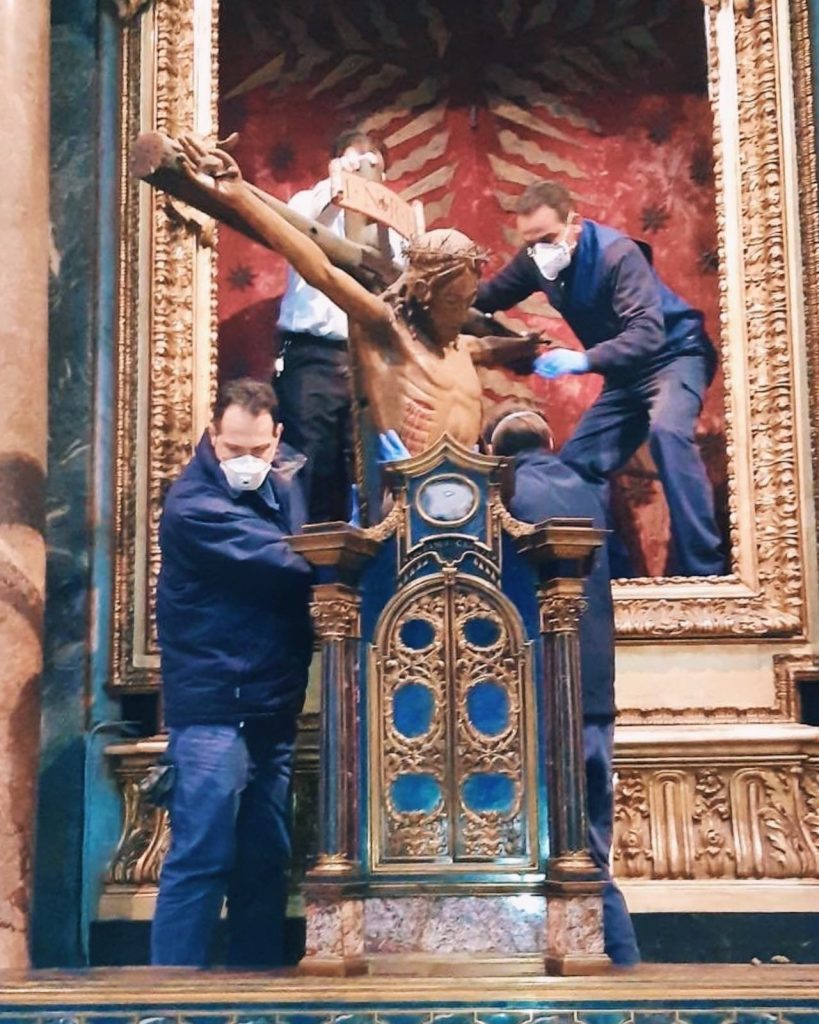 The crucifix will be meaningfully exposed again today, this time near the central gate of the basilica di San Pietro in Vaticano. 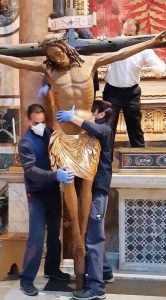 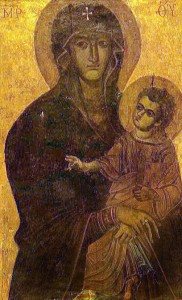 Together with the miraculous crucifix from the chiesa di San Marcello al Corso, another symbol historically linked to the prayers for the cessation of the epidemics is the Late Antique icon of the Virgin Mary from the basilica di Santa Maria Maggiore, which will likewise be exposed today before San Pietro’s entrance. 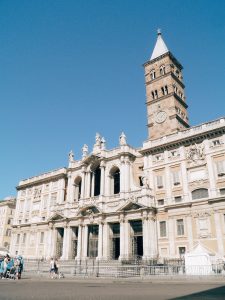 This depiction of the Virgin Mary is located on the high altar of the Pauline chapel inside Santa Maria Maggiore and it is considered as one of the most ancient, important and powerful Marian icon in the whole Rome (venerated for a long time by pope Francesco). Dating maybe to the 6th century, the sacred icon is said to be partially painted by Saint Luca and completed by the angels, hence its definition as “acheiropoieton” (ἀχειροποίητον): that is, not created by human hands. 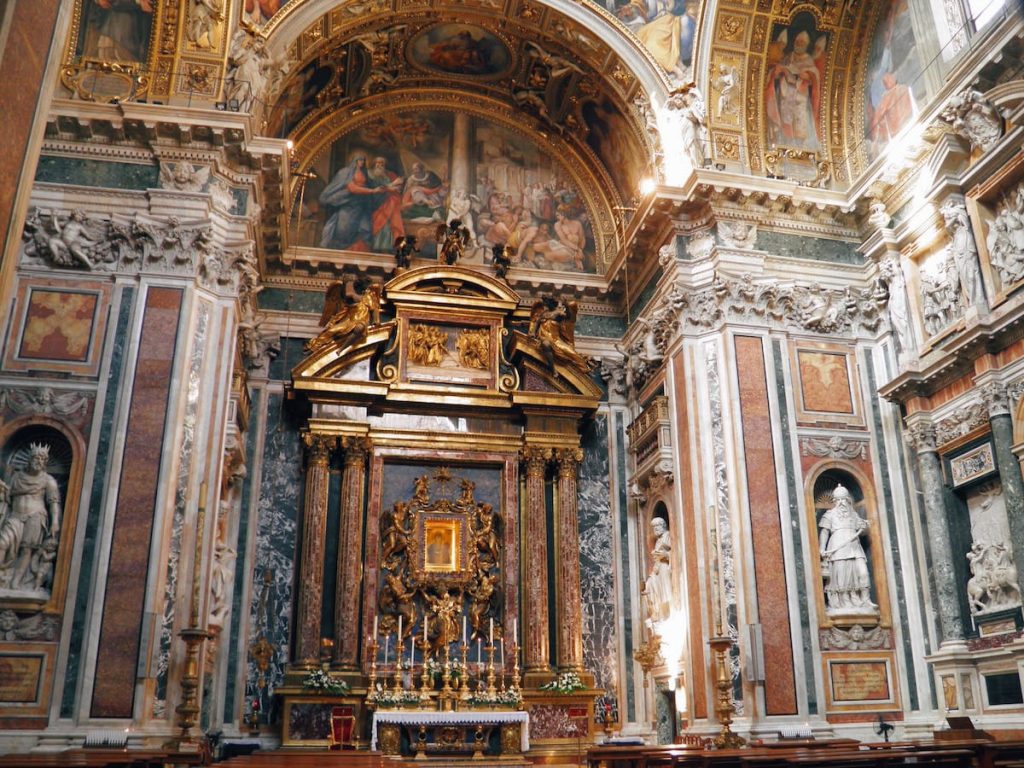 Interior of the Pauline chapel at the basilica di Santa Maria Maggiore, Rome. The tabernacle altar was designed by Girolamo Rainaldi (with later changes by Antonio Tempesta) and executed by Pompeo Targone, following the scale model by Giovanni Battista Crescenzi between 1609 and 1617. The sculptural decoration was executed by Camillo Mariani, Guillaume Berthelot and Stefano Maderno, with the intervention of Domenico Ferreri, Orazio Censore, Giulio Buratti, Gregorio de' Rossi and Pietro Gentile.

The specific title of the painting as “Salus Populi Romani” (“salvation of the Roman People”), given in the 19th century, is motivated by the belief of its miraculous powers protecting the people of Rome, as happened in 590, when the icon was taken in procession during the plague by pope Gregorio Magno and seven parades of worshippers (for this reason the procession was called “Litania Settiforme”), who attended the vision of Archangel Michael atop the Mausoleum of Hadrian as a sign that the pestilence was about to end. 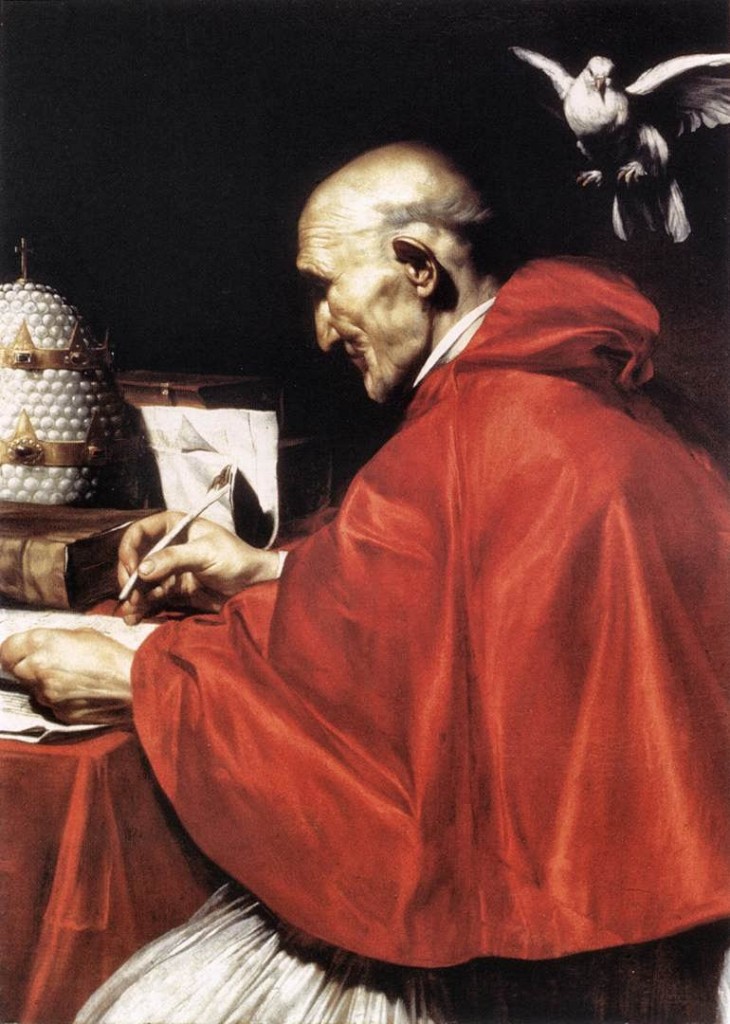 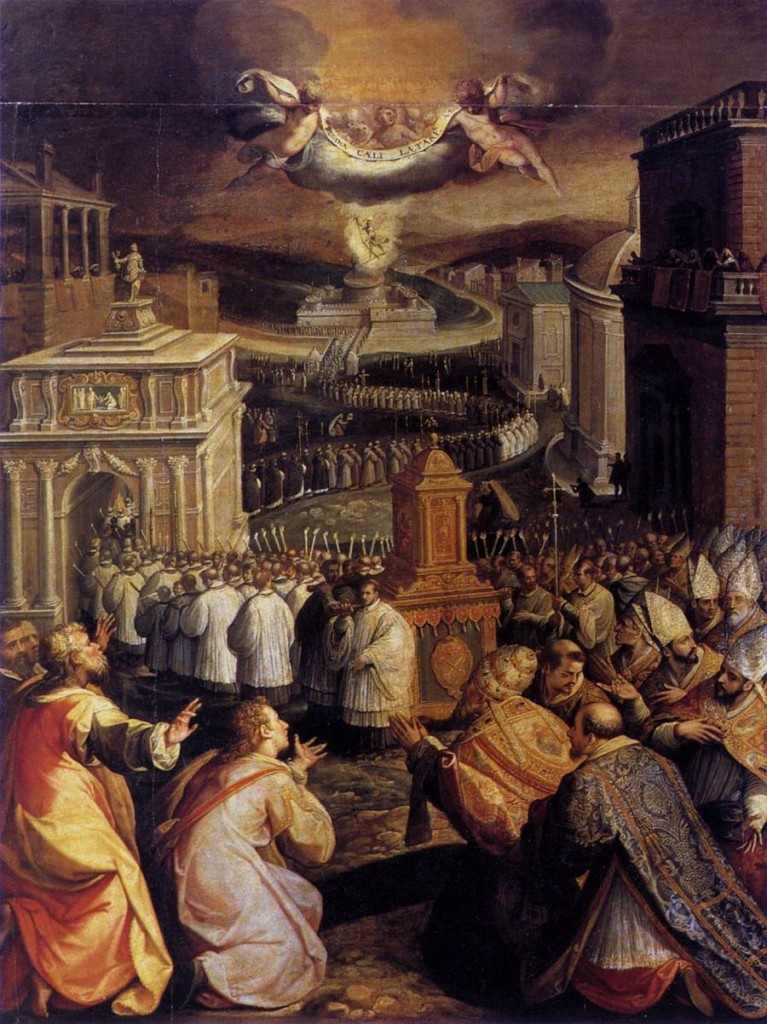 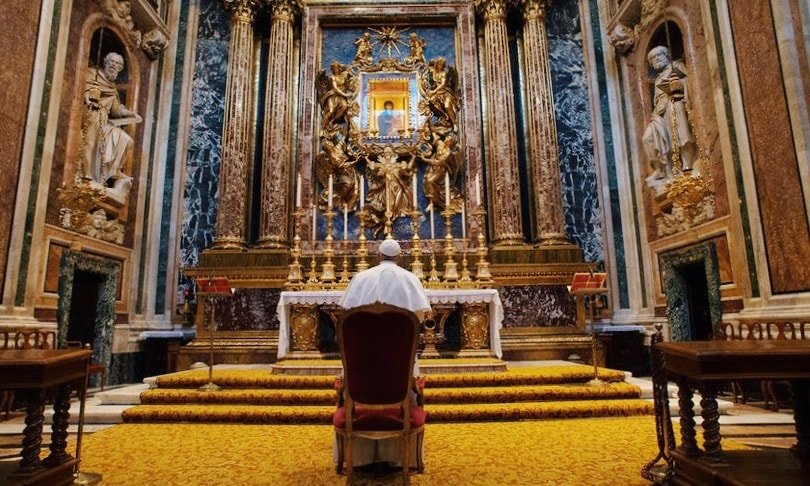 Memorable display of Raffaello’s tapestries at the ...