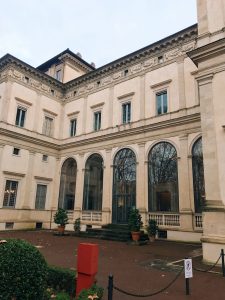 A harmonious garden nestled between the Tiber river and Porta Settimiana, picturesque icon of Trastevere neighborhood, is the bucolic setting of Villa Farnesina, one of the finest architectural and painting ensemble in Rome at the heights of Renaissance art. 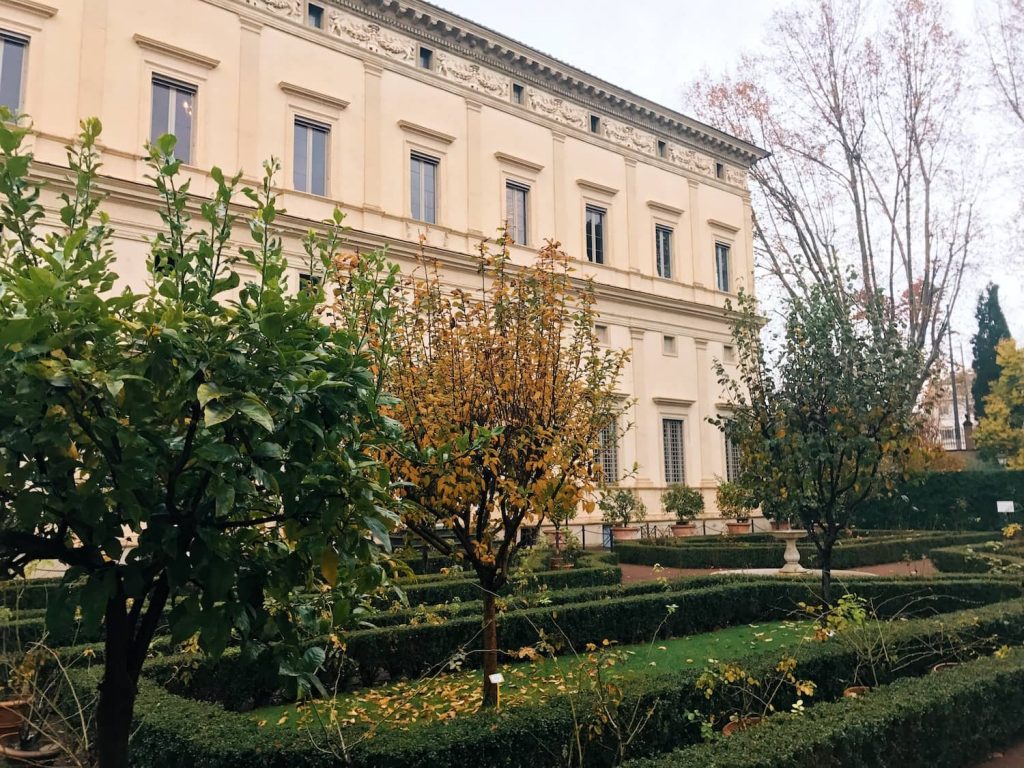 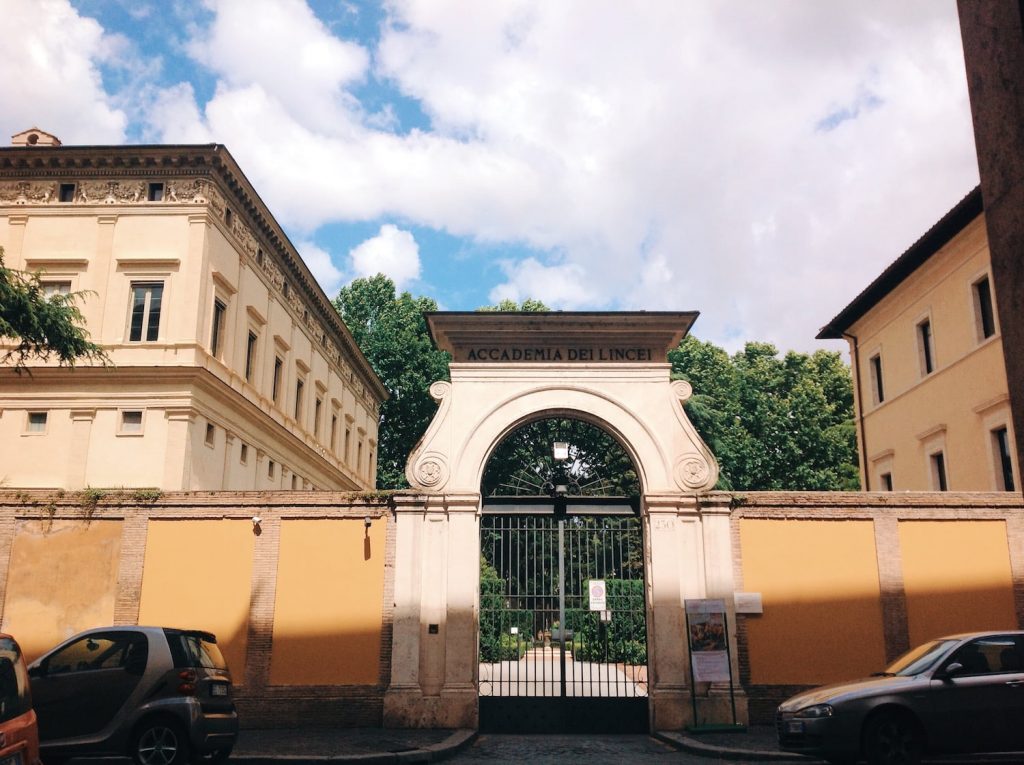 Entrance to Villa Farnesina from Via della Lungara, Rome 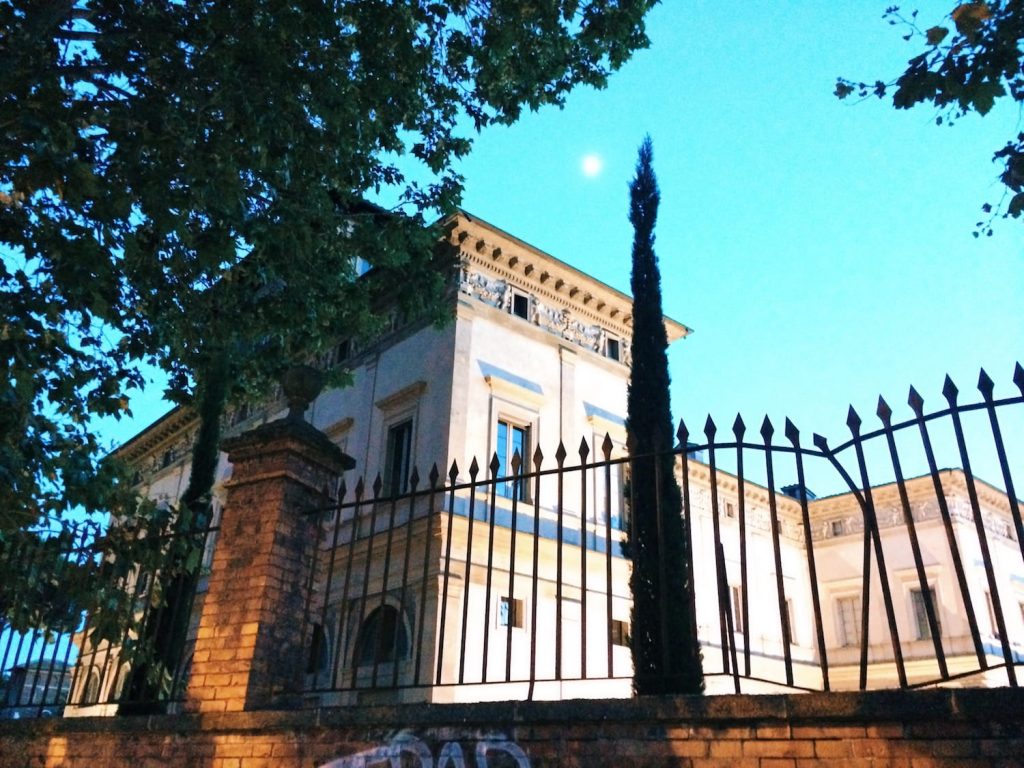 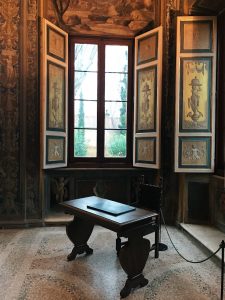 Villa Farnesina masterfully represents the principles of classic balance, harmony and proportions belonging to the early Sixteenth century Rome. It was patronized as a “suburban residence”, meaning located on those which were once the borders of the city, by Agostino Chigi (Siena, 1466 – Rome 1520). The wealthy and cultured banker from Siena, named “il Magnifico” due to the splendor of his lifestyle, commissioned the building to his fellow Baldassarre Peruzzi, Sienese artists, between 1506 and 1510. Various interventions lasted until 1520, when the death of Agostino Chigi caused the decay of the villa, with the loss of precious furnishings and copious artworks. 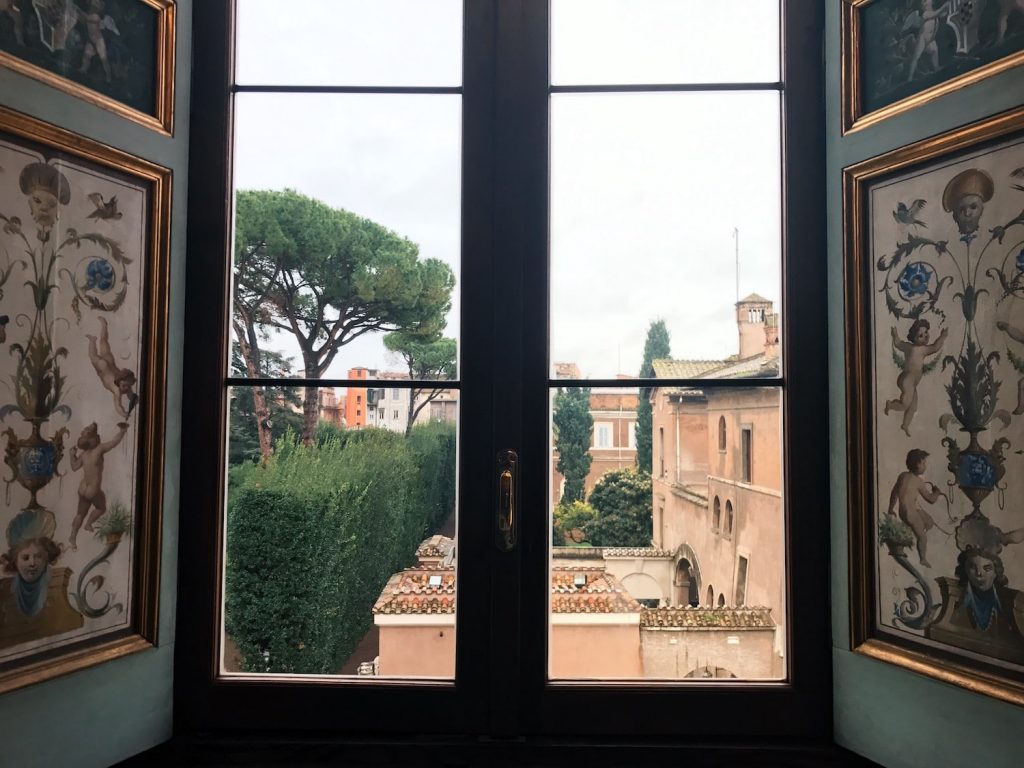 Around 1590, the powerful Farnese family took possession of the villa, hence its name “Farnesina”.

In the late 19th century, the building of the Tiber embankments entailed the demolition of part of the garden which constituted a wide “viridarium”, including the stable and the loggia (or pavilion) overlooking the river, probably designed by Raffaello.
At present, after many property passages and interventions, Villa Farnesina is the official seat of the illustrious Accademia Nazionale dei Lincei and houses the Gabinetto Nazionale delle Stampe, which is deemed as one of the richest Italian collections of prints and drawings. 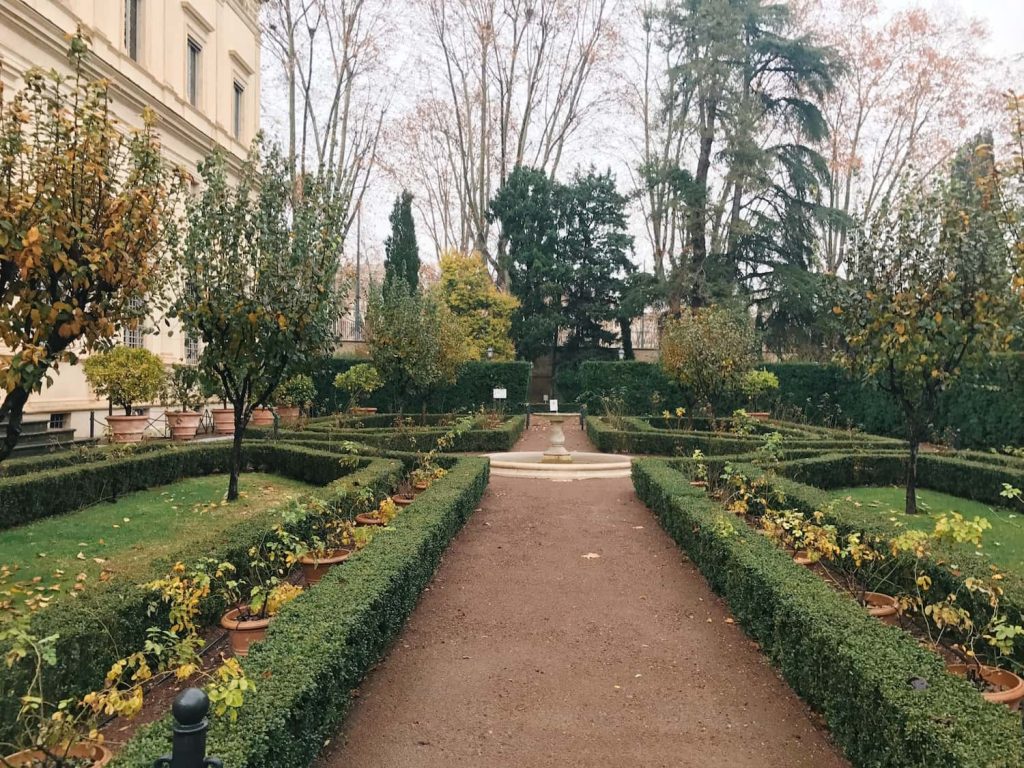 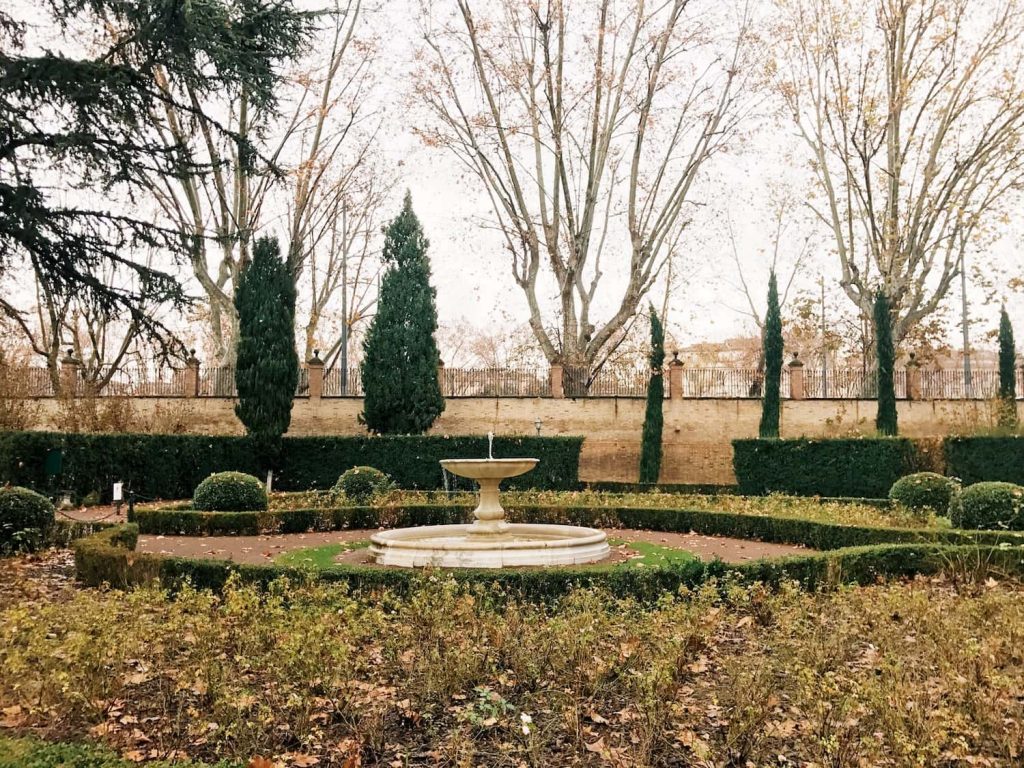 Villa Farnesina is one of the earliest example of villa made up of a central block characterized by a loggia of five arcades, framed with two side avant-corps. The exterior surface is articulated in two overlapping orders of Doric pilasters crowned with a high sculpted frieze, depicting putti and garlands. The closing of the loggia arcades with glass walls in order to safeguard the marvelous frescoes has unfortunately interrupted the intimate connection between the villa and its surrounding luxuriant garden planted with conifers and laurels hedges, together with the original perception of the perfect balance between full and empty spaces. 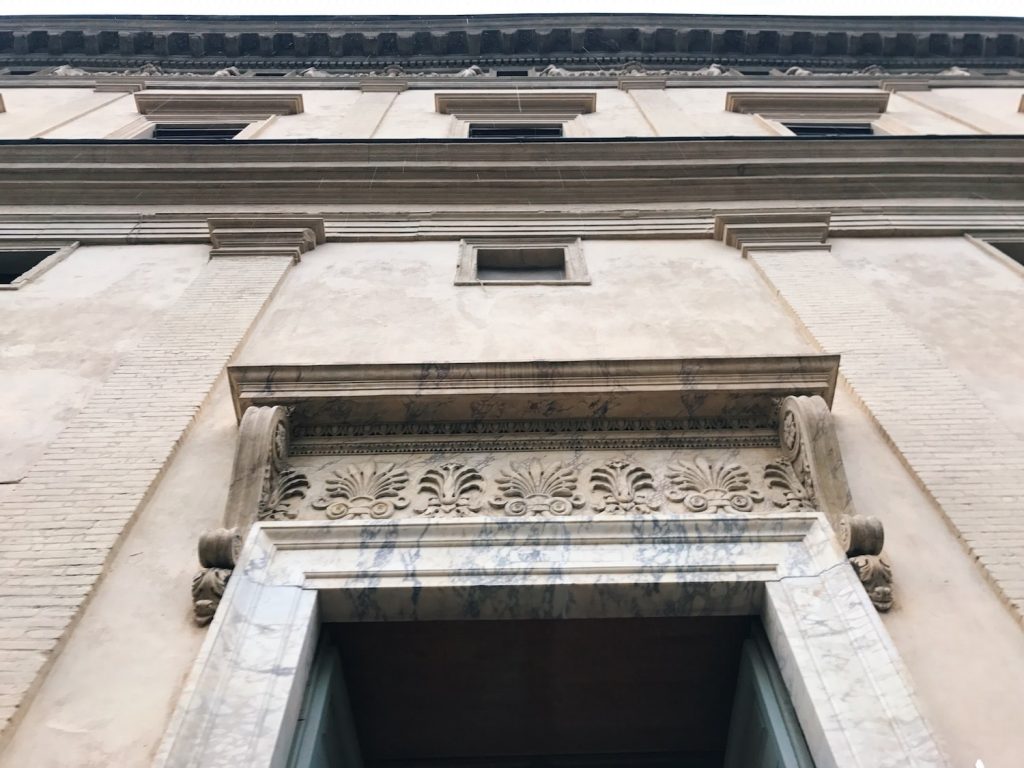 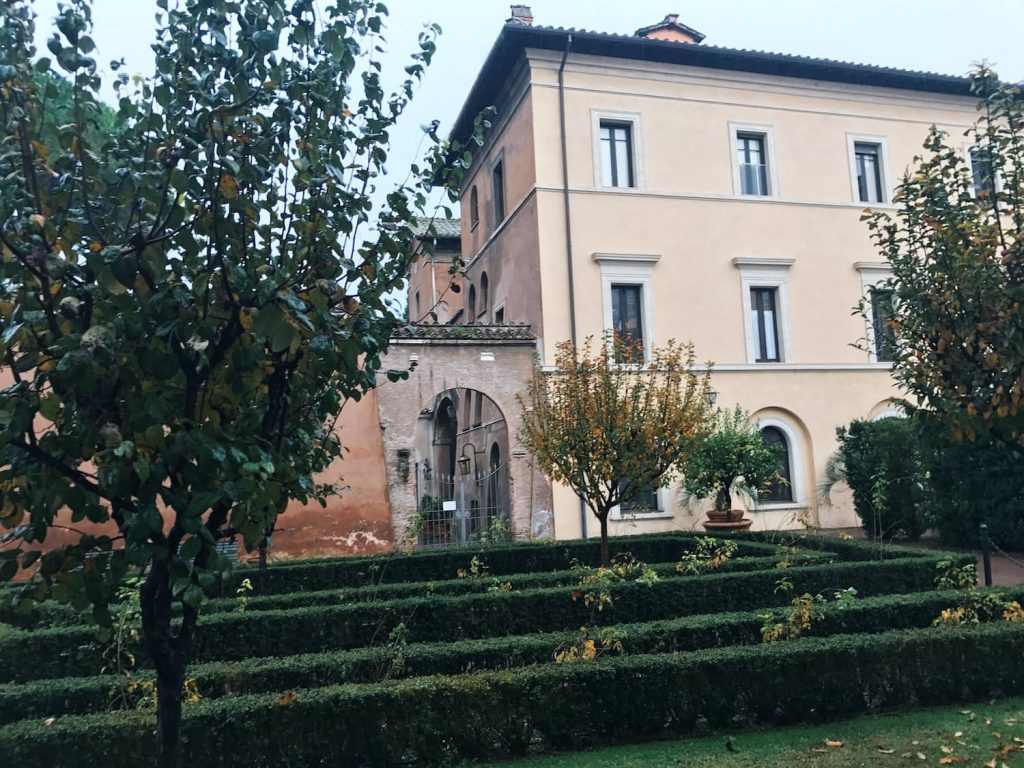 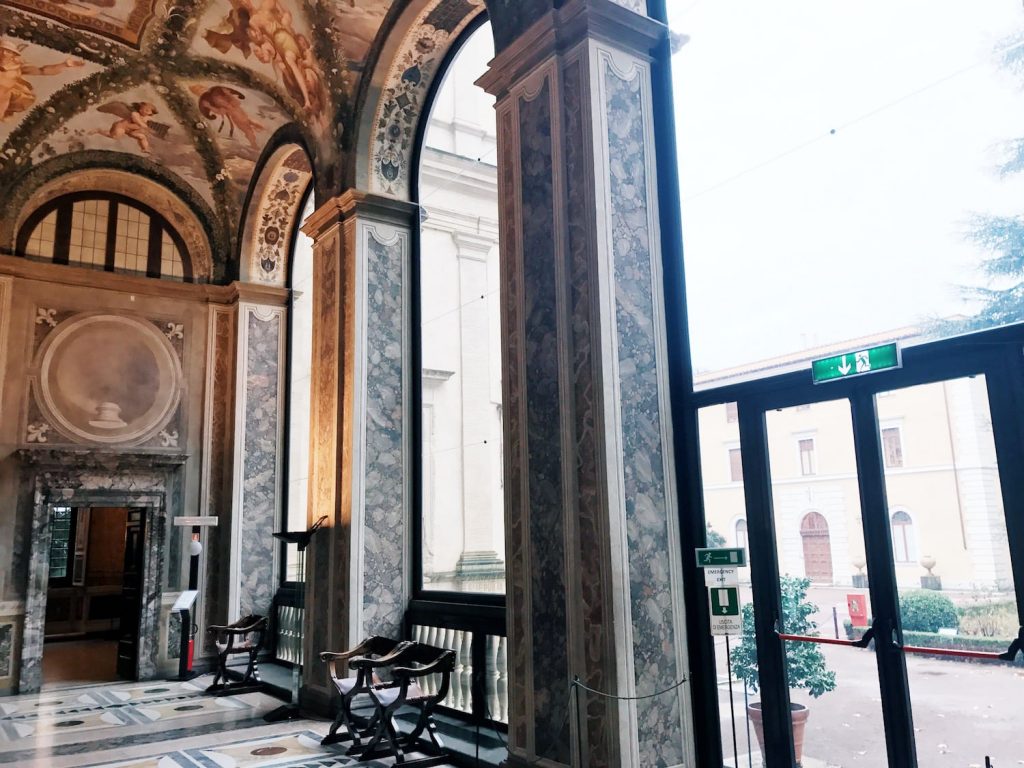 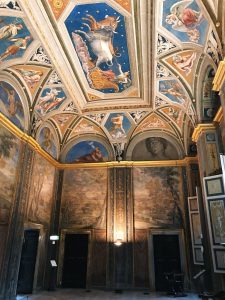 Executed by Baldassarre Peruzzi around 1511-1512 and later retouched and restored, the paitings adorning this hall ceiling at the ground floor are articulated in geometric spaces split by the painted architecture joining up the wall structure. The lunettes were painted in 1511-1512 with mythological scenes by Sebastiano del Piombo, who also executed the “Polyphemus”. On the main wall, the renowned fresco painted by Raffaello in 1513-1514 represents the “Triumph of Galatea”. 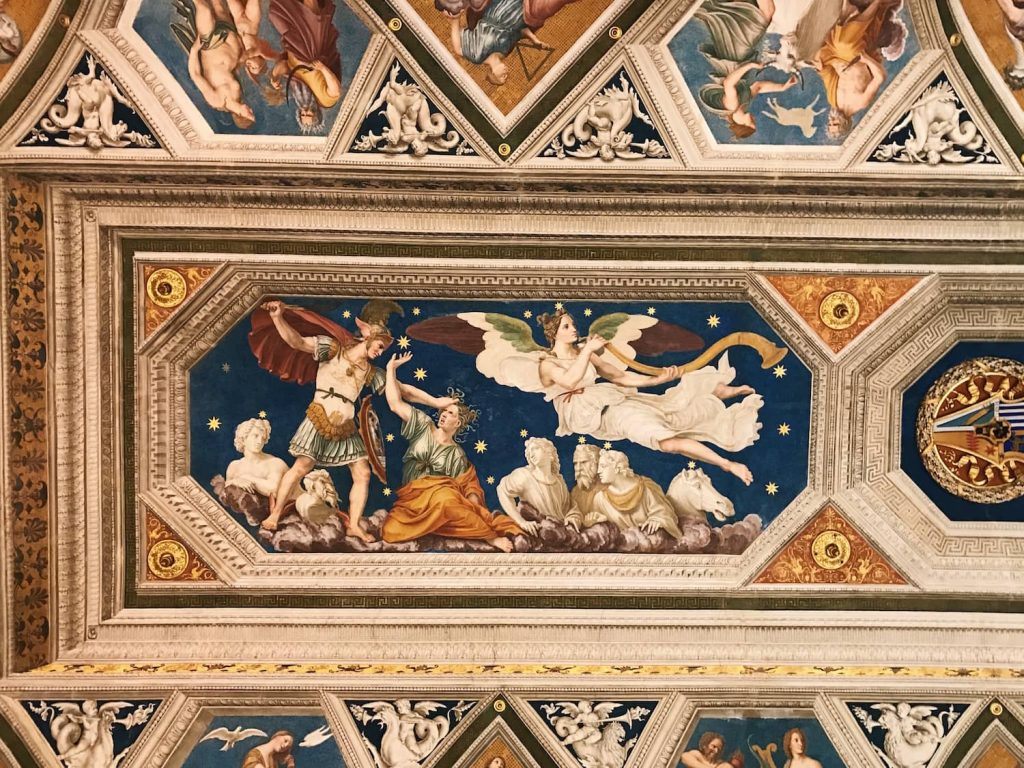 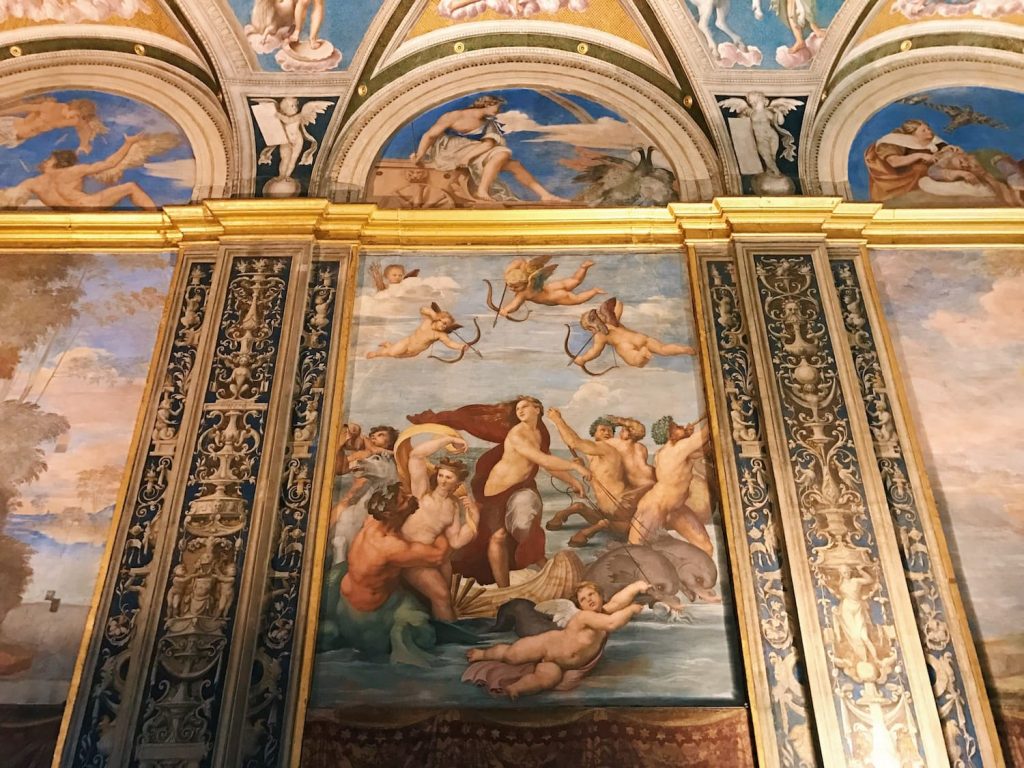 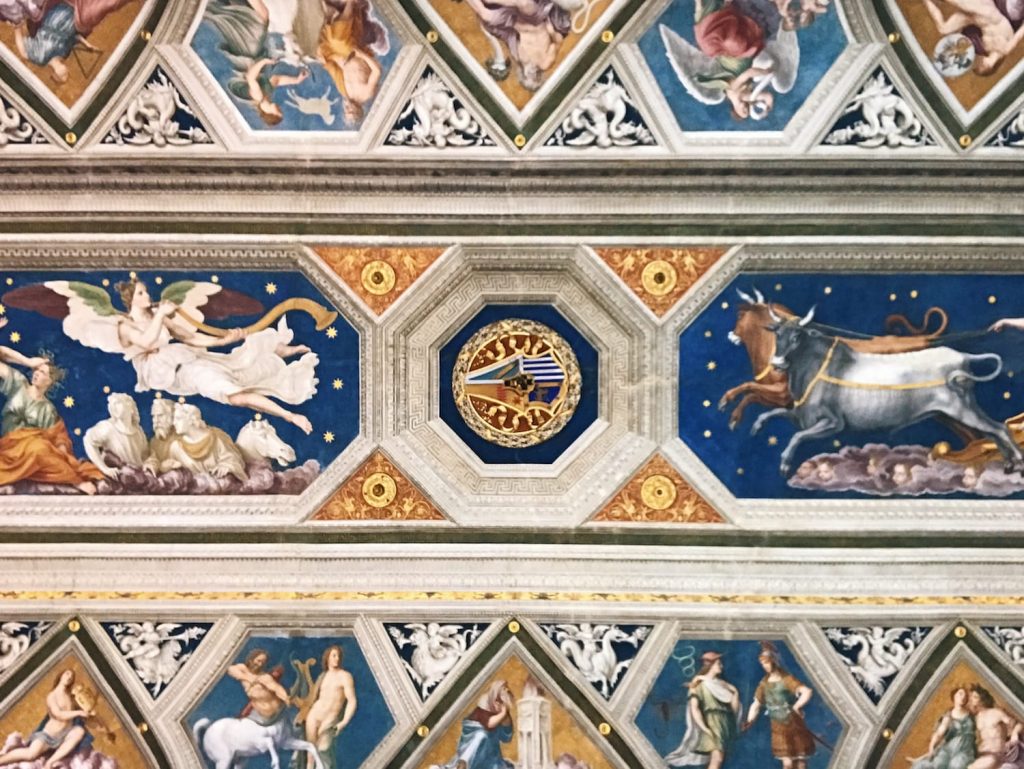 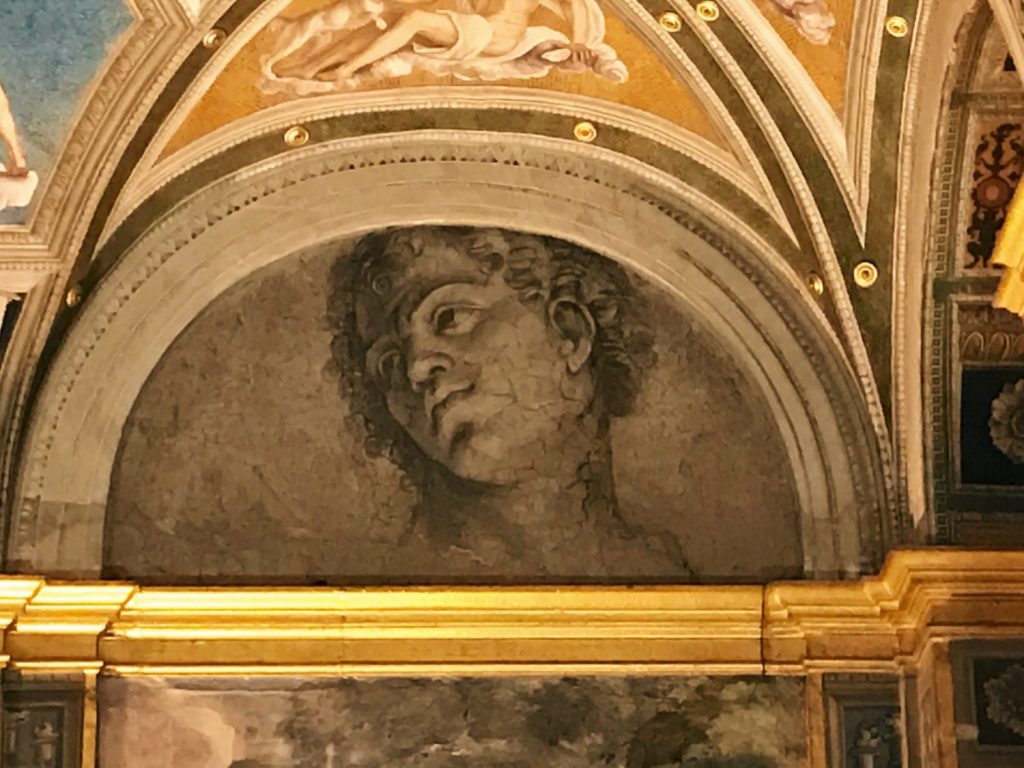 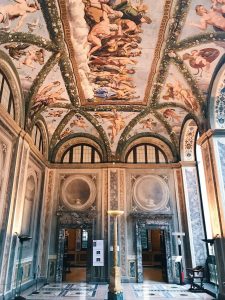 The Loggia di Psiche is fully embellished by the celebrated cycle of frescoes representing mythological figures and episodes of the tale of Psyche from the “Metamorphoses” by Apuleius, which Augustine of Hippo referred to as “The Golden Ass” (Asinus aureus). The frescoes were painted within 1517 by Raffaello Sanzio’s pupils as Giulio Romano, Giovanni Francesco Penni, Raffaellin del Colle and Giovanni da Udine after the great Renaissance master’s designs, and later retouched by Carlo Maratta in 1693-1694. At the center of the figurative system, the “Council of the Gods” and the “Marriage of Cupid and Psyche” are painted on faux tapestries spread out against the airy sky among opulent illusionistic garlands, rich of fecundity symbols, which originally merged with the “viridarium” pergolas. 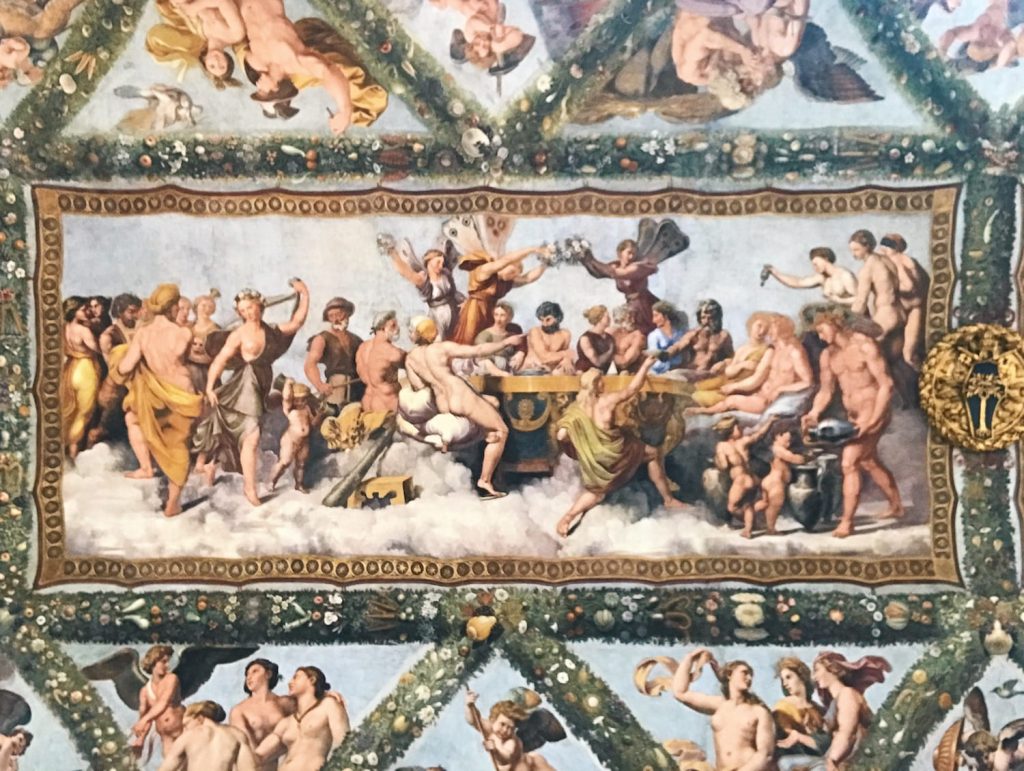 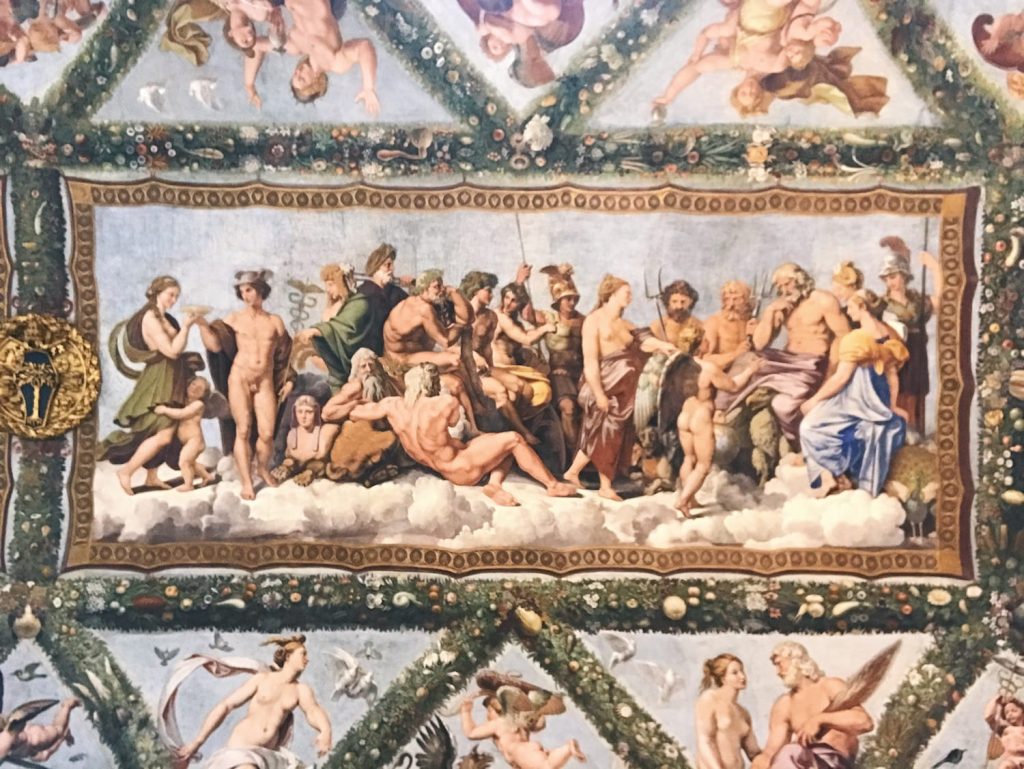 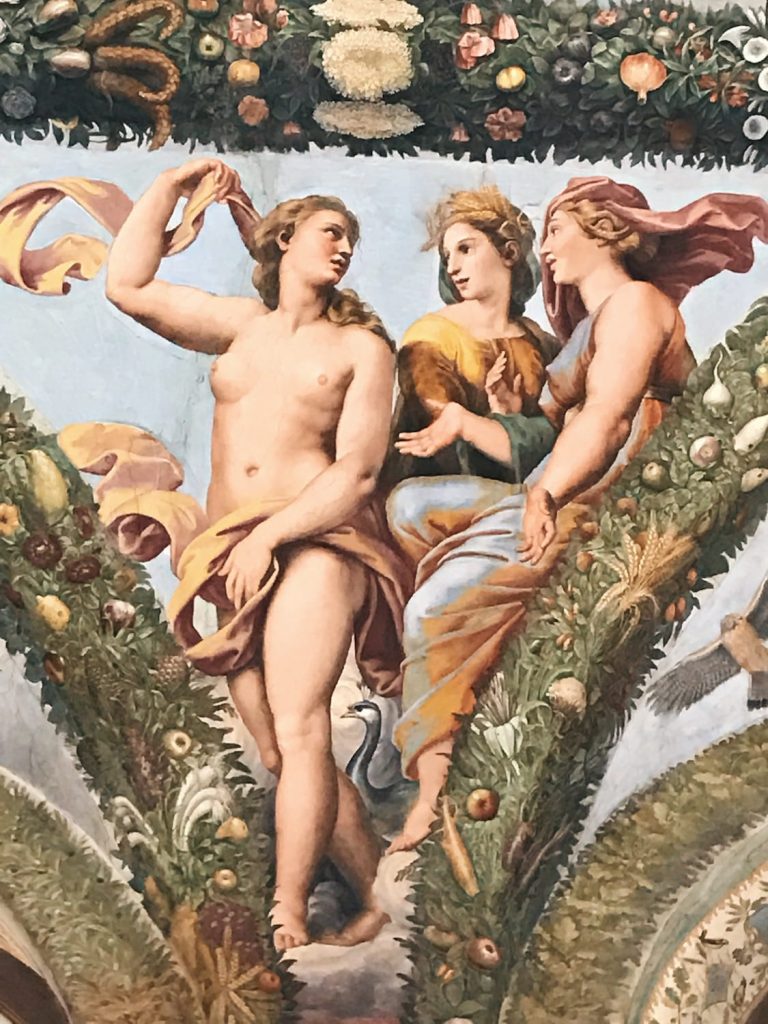 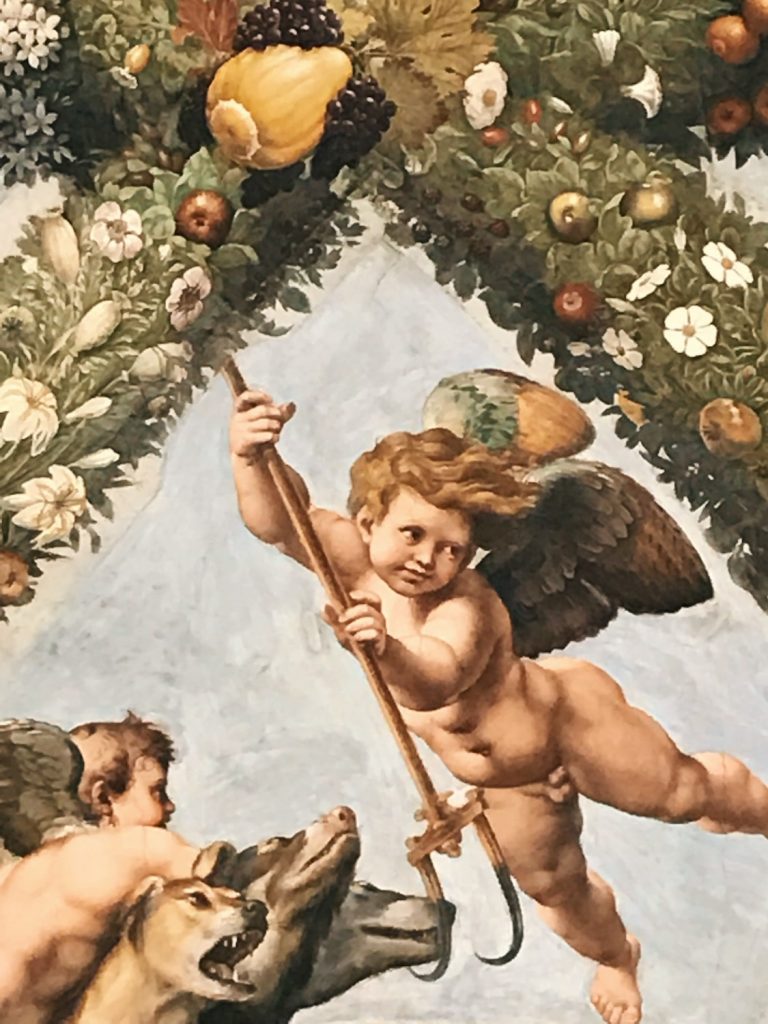 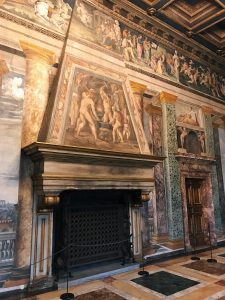 At the first level of the building, this large hall hosted the nuptial banquet of Agostino Chigi and his former mistress Francesca Ordeaschi on the 28th August 1519, and is characterized by the stunning perspective system of the faux loggias overlooking views of Rome, painted by Baldassarre Peruzzi and helpers in 1517-1518. 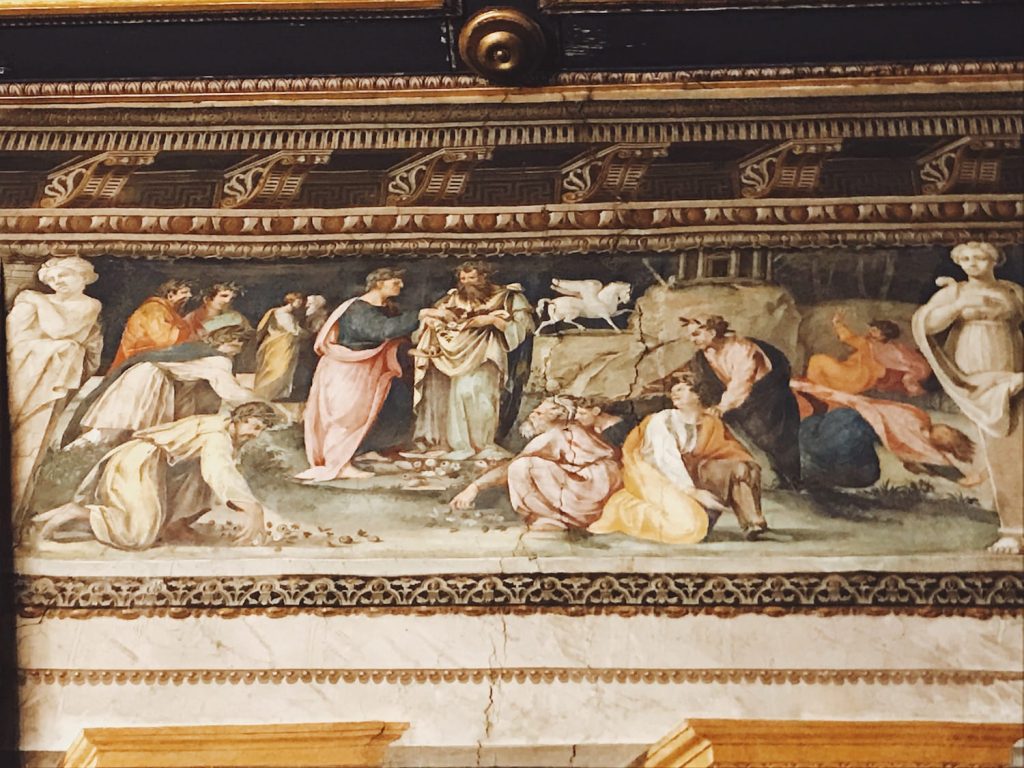 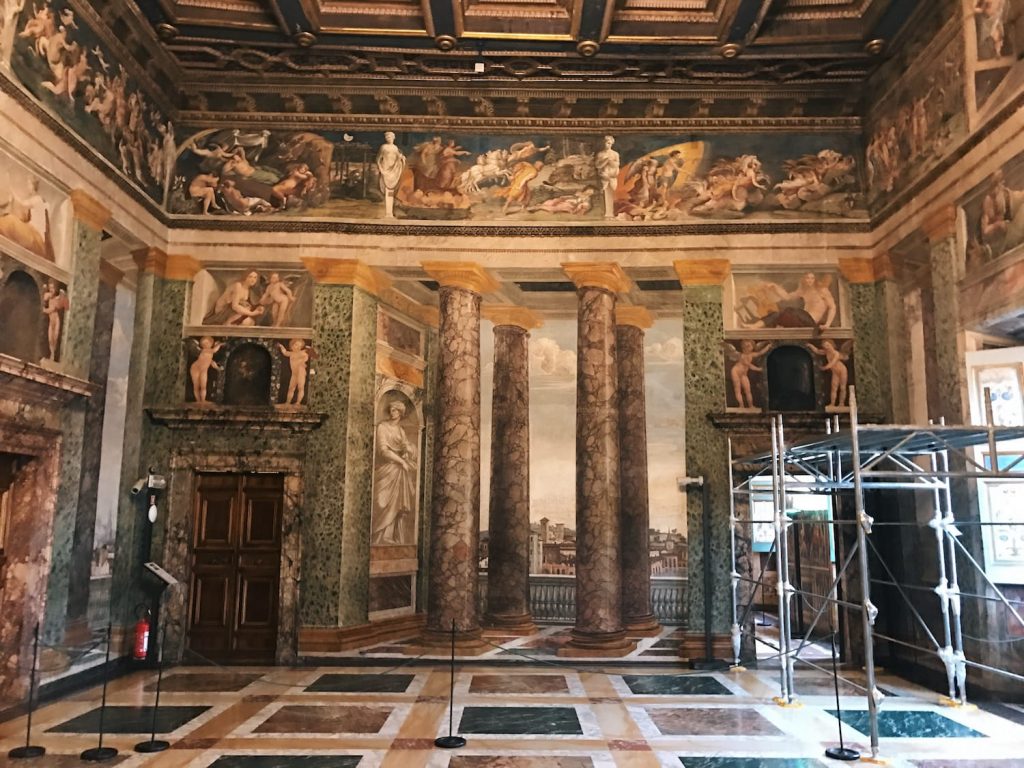 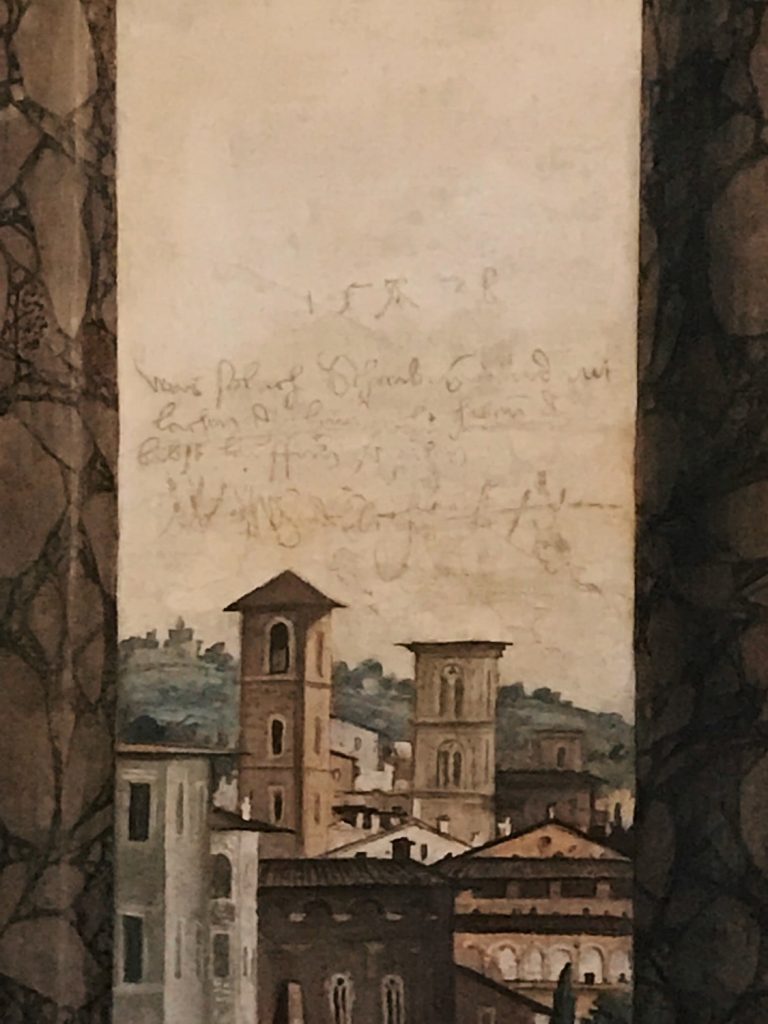 Sixteenth century writings by Landsknecht ("1528 - because who is writing shouldn't laugh: Landsknecht made the Pope run away"), Salone delle Prospettive, Villa Farnesina, Rome. 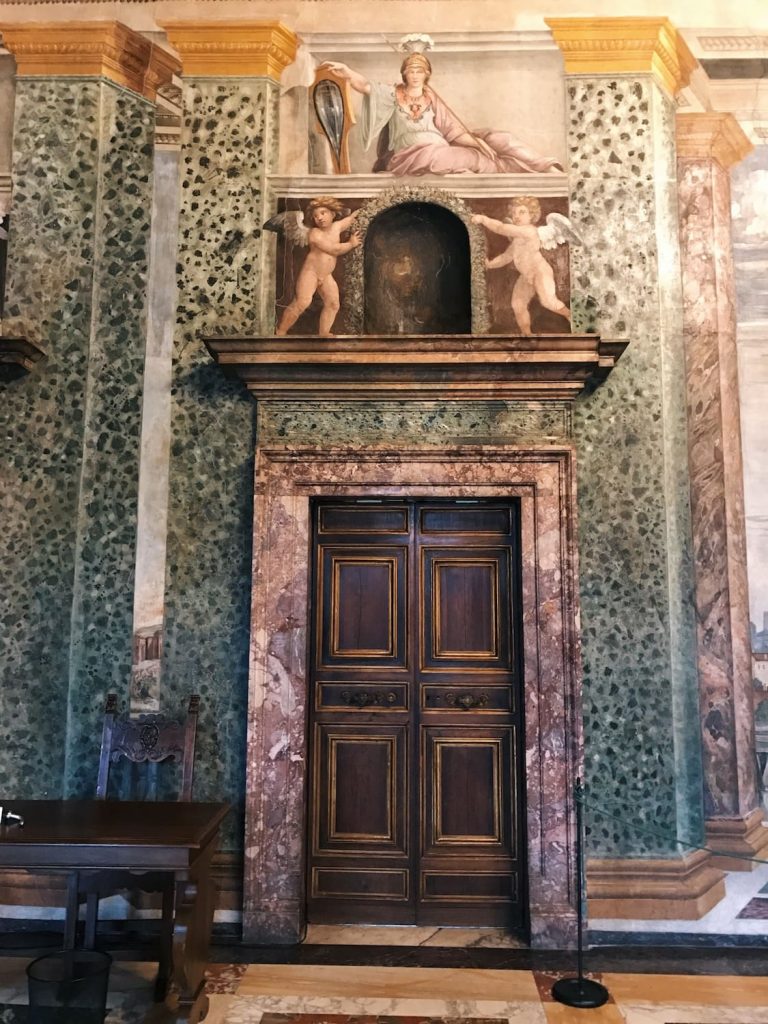 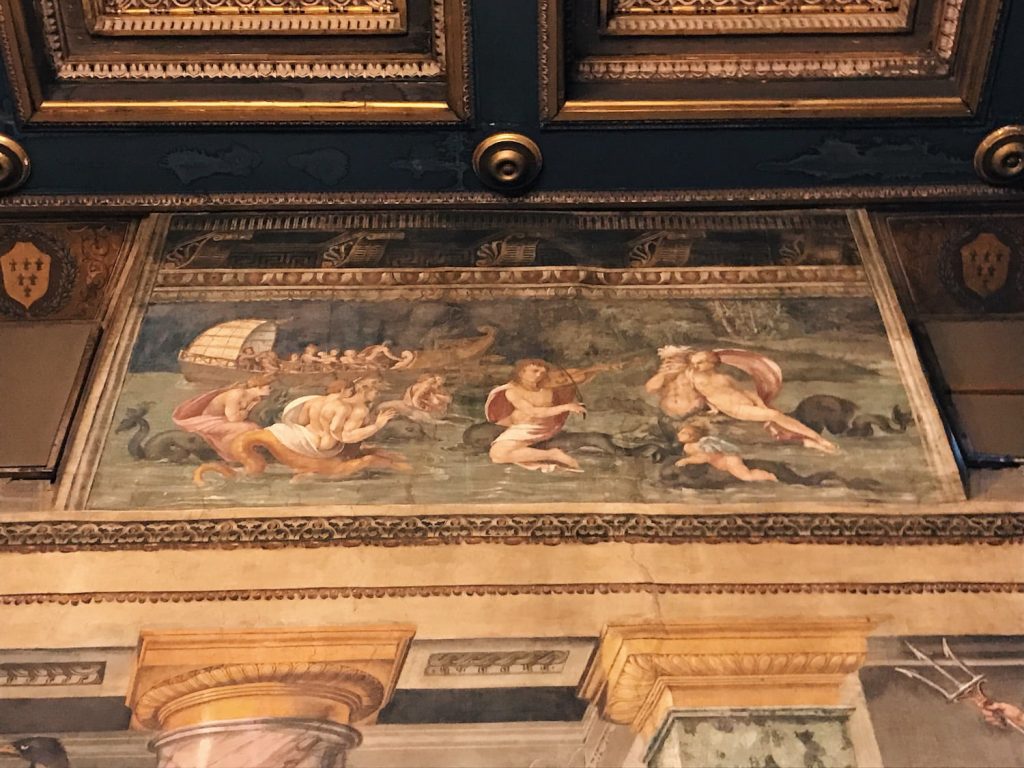 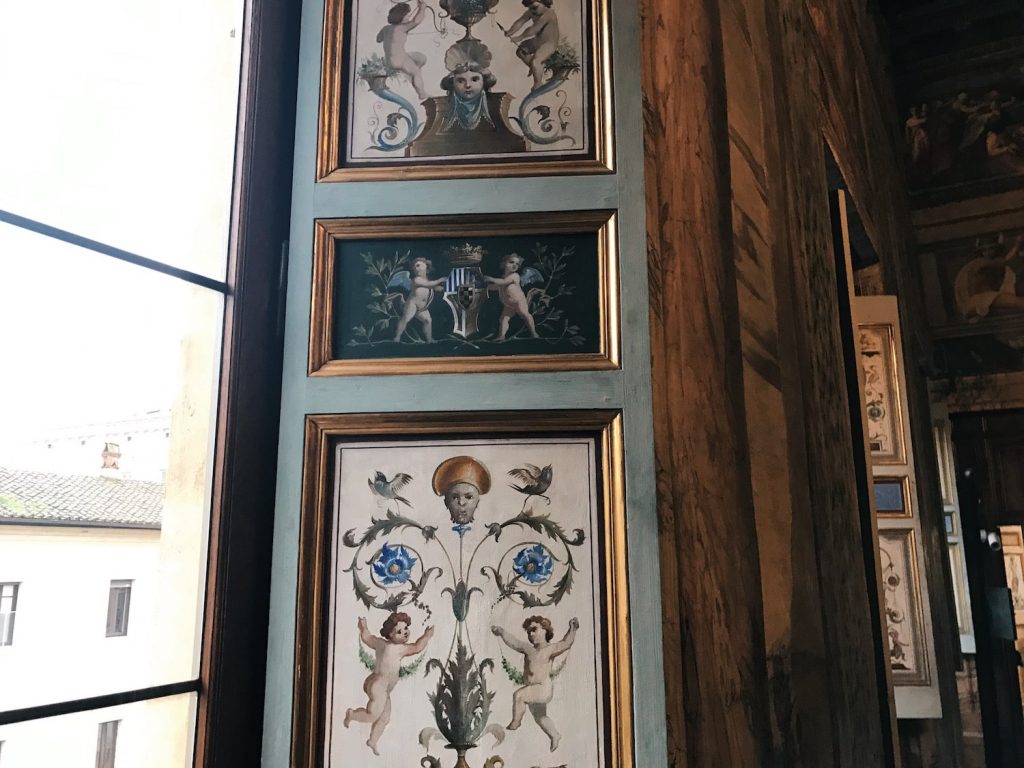