To commemorate the Pentecost, an evocative event happened on Sunday 20 May 2018 at the Pantheon: thousands of red rose petals fell down from the monument oculus at the end of the religious mass, to symbolize the Holy Spirit descending in the guise of “cloven tongues like as of fire”.

Watch the live streaming by Itinerome on Periscope!

The Christian feast day of the Pentecost celebrates the descent of the Holy Spirit upon the Apostles and the other followers of Jesus Christ together with the Virgin Mary while they were in Jerusalem, as narrated in the Acts of the Apostles. This miraculous event is also considered the symbolic moment of the birth of the Church.

As every year, an extraordinary religious Mass was held at the Pantheon, which is a consecrated church named basilica collegiata di Santa Maria ad Martyres beyond being the Ancient Roman temple, originally dedicated to the twelve Gods and the living Sovran. The consecration to a Christian church followed the placement at the Pantheon of several martyrs’ remains from the Christian catacombs wanted by pope Bonifacio IV in 608 AD. 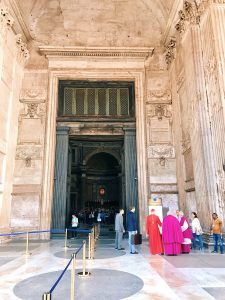 The arrival of the cardinal Gianfranco Ravasi to officiate the religious Mass, on the occasion of the Pentecost ceremony at the Pantheon in Rome.

This year, the religious Mass was officiated starting from 10.30 am by the cardinal Gianfranco Ravasi and the choir led by the maestro don Michele Loda accompanied ceremony.
Great expectation and interest involve this special event so, due to the high influx of people and for security reasons, the space inwards was limited to 850 people, whose seats were partly reserved to official guests like ambassadors and other personalities. Who however wished to make sure of entering inside the Pantheon to attend the Mass arrived early in the morning and waited in line, someone even from 6.00 am, as told by the organizing staff. The space of the piazza in front of the monument throughout the ceremony was crowded of people as well, who hoped to see something through the open portal and to enter at a later time. 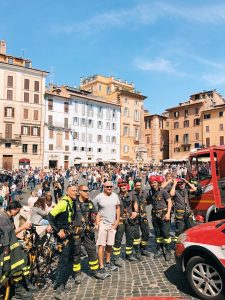 The firemen of Rome, getting ready with their harness to climb on the top of the Pantheon and let the petals fall down inside the monument, on the occasion of the Pentecost ceremony at the Pantheon in Rome.

The dangerous task of climbing on the top of the Pantheon to let the petals fall down upon the worshippers is usually assigned to Rome firemen who, after getting ready with their harness, climbed the exterior surface of the dome until they reached the central opening on the top of it, called “oculus”, and let the rose petals fall down inside the monument at the end of the Mass, around noon. The moving rainfall of scented petals, red as the flames of the Holy Spirit and lightened up by the rays of sunlight, was enhanced by the grandiose monumentality of the Pantheon's dome, which is 43.3 meters high and it is still considered the largest unreinforced coffered concrete dome existing in the world.

The painted garden from the Villa of ...

A privileged visit to the laboratory where ...