Behind the popular piazza Navona, there’s a hidden place in Rome where the smell of the past still reigns and the noisy strides of history become gentle and slow. One of the most ancient public libraries in the whole Europe and the earliest to publicly open in Rome at the beginning of the 17th century, the Biblioteca Angelica still survives today and it’s one of the most renowned institutions conserving almost intact its huge bequest of its historic collections. 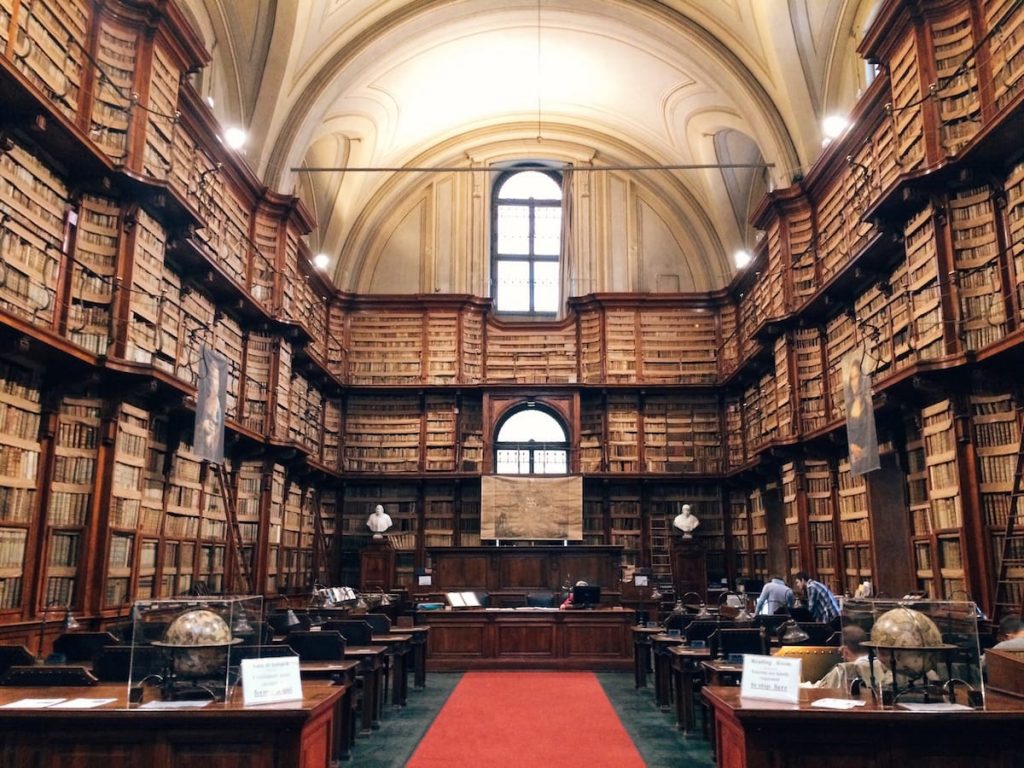 Salone (or vaso) Vanvitelliano, interior of the Biblioteca Angelica, Rome. 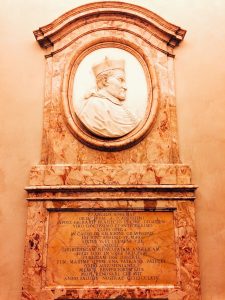 Memorial relief dedicated to Angelo Rocca, 1764, vestibule of Biblioteca Angelica, Rome. The illustrious humanist and collector established good relationships in Venice with some typographers and then, as renowned editor of texts, he was appointed in Rome by pope Sisto V at the Tipografia Vaticana (printing office) and involved in the pope’s ambitious project of the Biblioteca Apostolica Vaticana.

This enchanting library is set in a more recent wing of the building belonging to the Augustinian complex. This section was started by Francesco Borromini around 1658-1659 and completed by Carlo Murena together with Luigi Vanvitelli in the mid-18th century. Vanvitelli designed the so-called “vaso”, the large hall at the first level characterized by a rectangular plan, barrel vault and precious wooden shelves by Nicola Fagioli.

The history of the library is very ancient: the first nucleus of the book collection was assembled around the end of the 13th century and belonged to the Monastery of Sant’Agostino. In the late 16th century, the Augustinian bishop Angelo Rocca (Rocca Contrada, now Arcevia, 1545 – Rome, 1620) allowed his personal collection to flow into that library, on condition that it would have been turned into a publicly accessible institution, hence its name "Angelica". Around 1604 the library was already opened to the public, although the formal act dates to 23 October 1614. 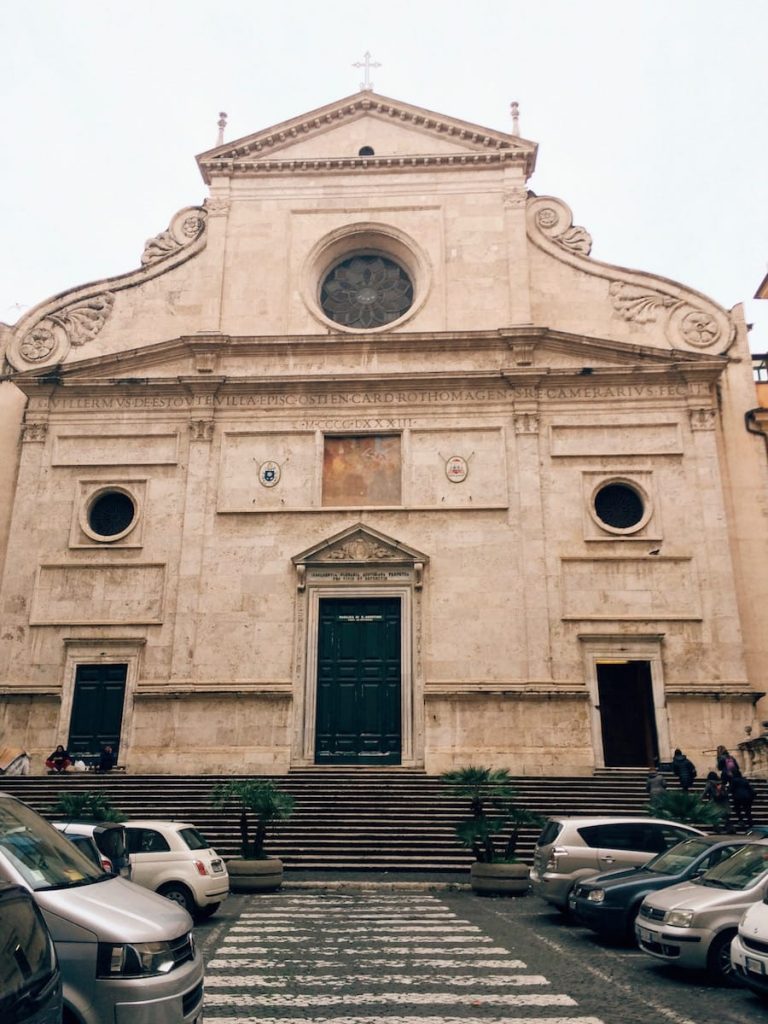 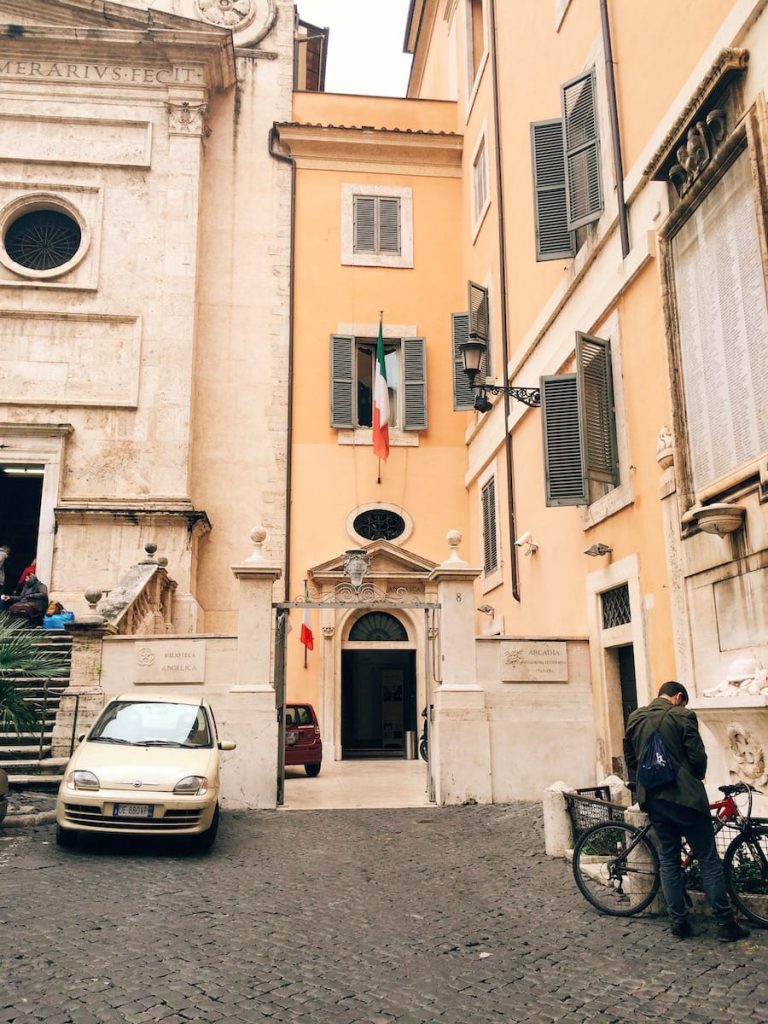 Entrance to the Biblioteca Angelica, Rome. On the right side of the basilica di Sant’Agostino, which enshrines the well-known Madonna dei Pellegrini by Michelangelo Merisi da Caravaggio, the entrance to the library can’t foretell the grandiose interiors enough. 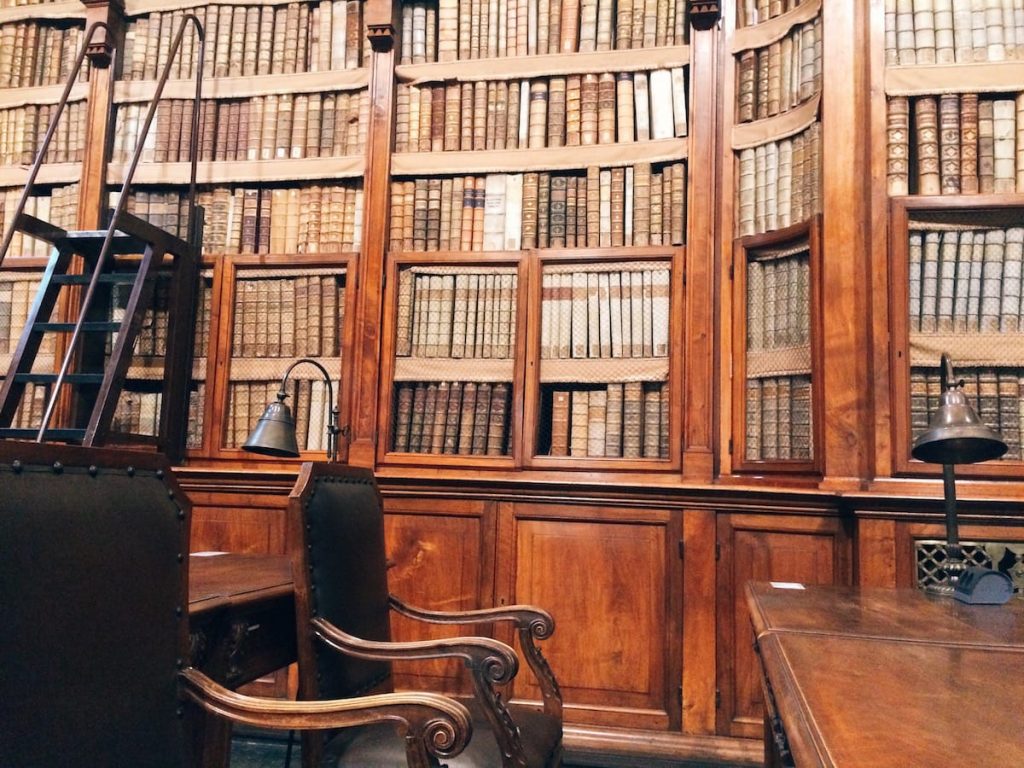 The readers' seats at the Biblioteca Angelica, Rome. 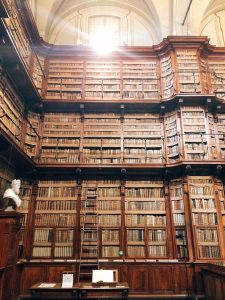 Left wall of the "vaso" at the Biblioteca Angelica, Rome. The library holdings were also enriched by several entries, like part of Egidio da Viterbo (Giles Antonini of Viterbo)’s personal collection of books.

The library holdings now consist of nearly 200k volumes especially covering Italian literature and theatre, philology and Augustinian thinking fields, as well as rare editions of forbidden text dealing with Reformation and Counter-Reformation fields. A notable part of the book assets is very ancient: for example, 11k books date back to the 16th century besides over 1k incunabula, around 2.7k manuscript volumes and 3k missals from the 9th century onwards.

Everybody can have access to this immense heritage and feel the emotion of sitting on antique armchairs at wooden desks, lightened by brass lamps, and carefully leaf through fragile pages, surrounded by hundreds of thousands silent words.

Opening time: it changes every week but it's usually open on workdays (especially on Monday, Tuesday, Wednesday, Friday) between 10.30 am and 1.30 pm. However, always check website news section for complete and updated timetable. Guided group tours are available upon appointment in advance with the Didactis Office.

Tickets: free (entry is allowed to all those who are over 16 years old with an identity document) 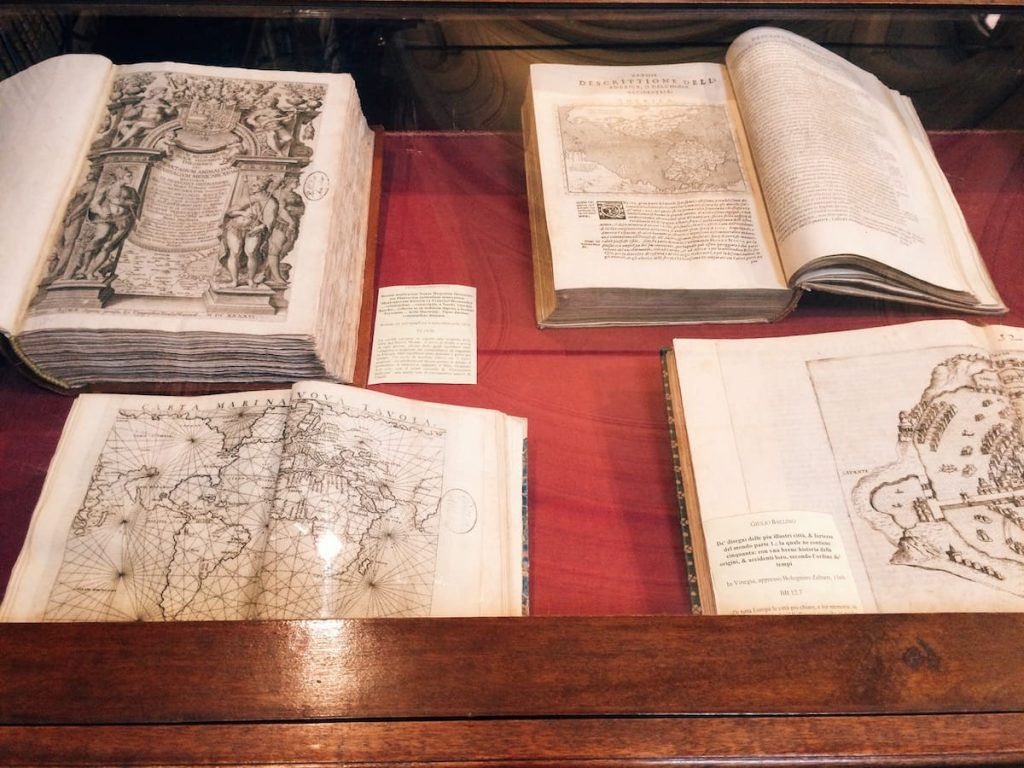 Old books on display at the Biblioteca Angelica, Rome 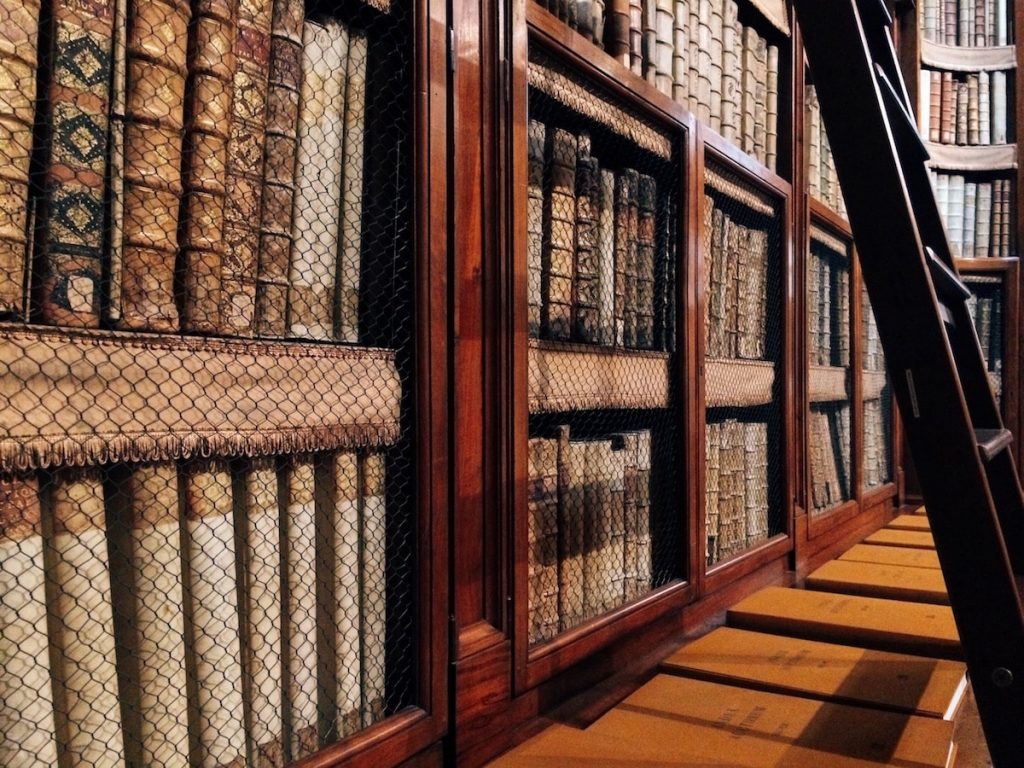 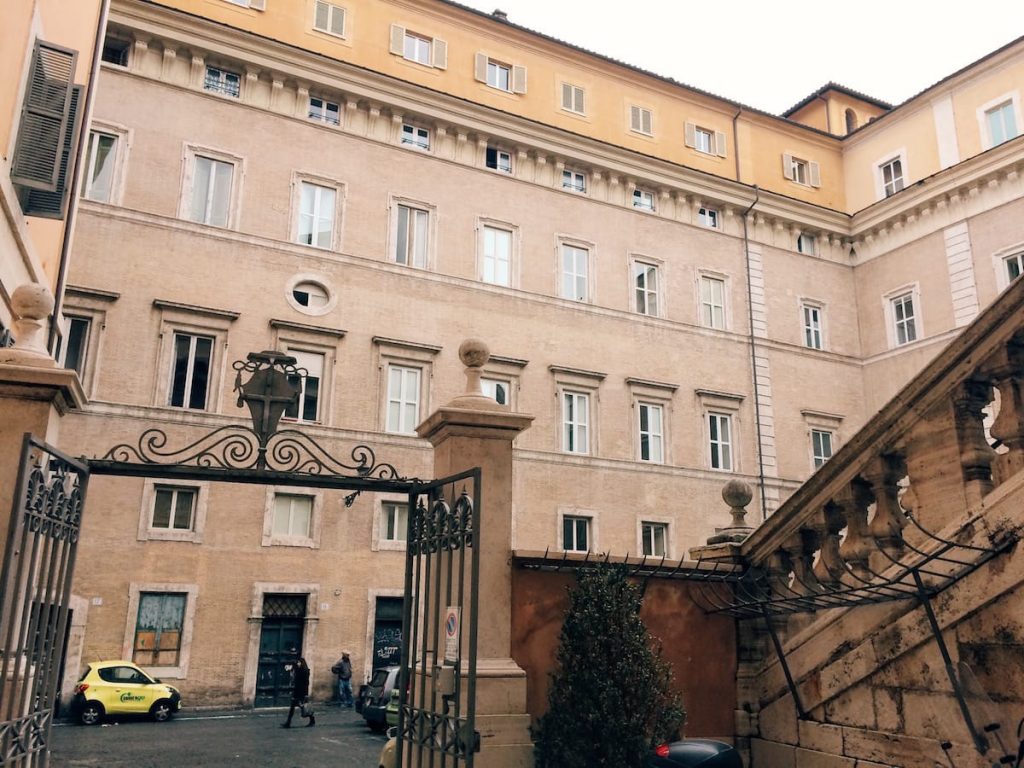 An extraordinary visit to the majestic remains ...