Set in the characteristic alleys of Monti neighborhood, in the area corresponding to the ancient Roman quarter of the Suburra, the chiesa di Santa Maria ai Monti is one of the most interesting examples of the transition between Renaissance and Baroque architecture. 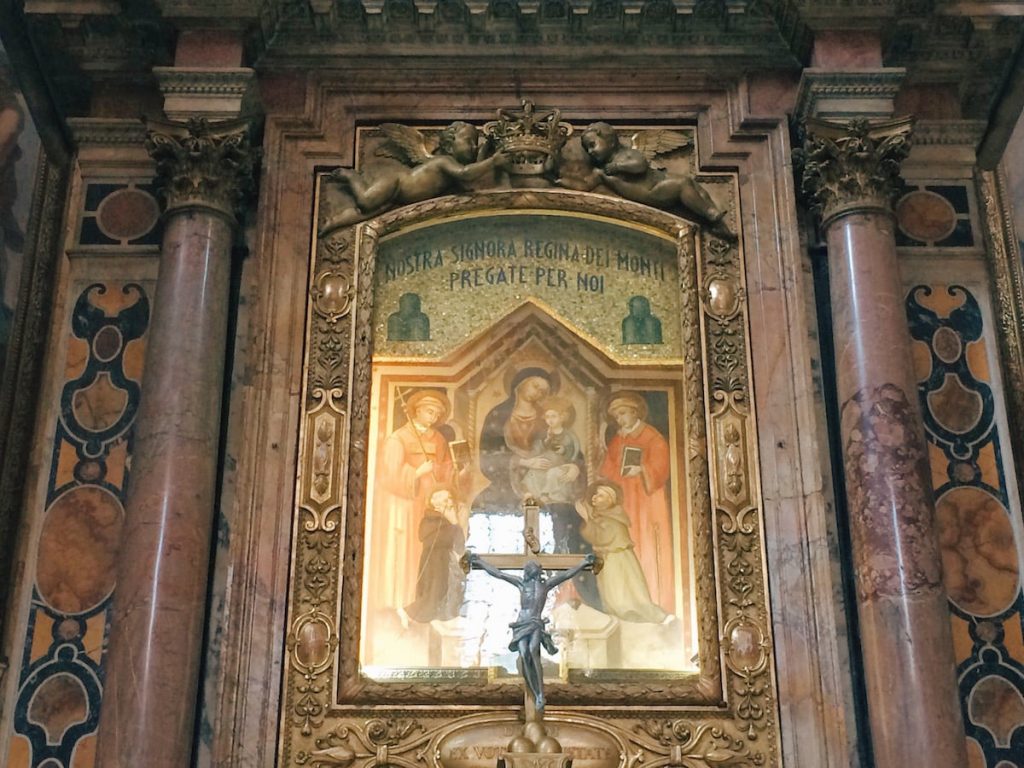 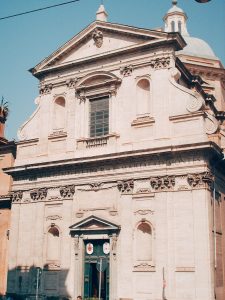 Giacomo Della Porta, façade of Santa Maria ai Monti, travertine, begun in 1580 and restored in 1991-1992. A triangular tympanum crowns the façade, characterized by two orders of lesenas: elegant volutes link the inferior Corinthian order to the upper one, narrower and composite. Between two niches for each level, the central sector shows the entrance portal and the wide aedicule window.

The devotion to the Madonna dei Monti originated back to the 16th century, when miraculous events were said to happen inside the remains of an abandoned 13th century Poor Clare convent, then reduced to a complex of houses and storage rooms. There, on the 26th April 1579, after several mysterious earthquakes occurred in a ruined hayloft, a 15th century fresco painting representing the Virgin Mary with Child and Saints was re-discovered and, according to the tradition, it became responsible for other unexpected miracles.

Upon popular request, pope Gregorio XIII Boncompagni decided to built a new church on the site in order to celebrate the re-discovery of this miraculous image and still nowadays a copy of this sacred picture is taken in procession on the 26th April every year. 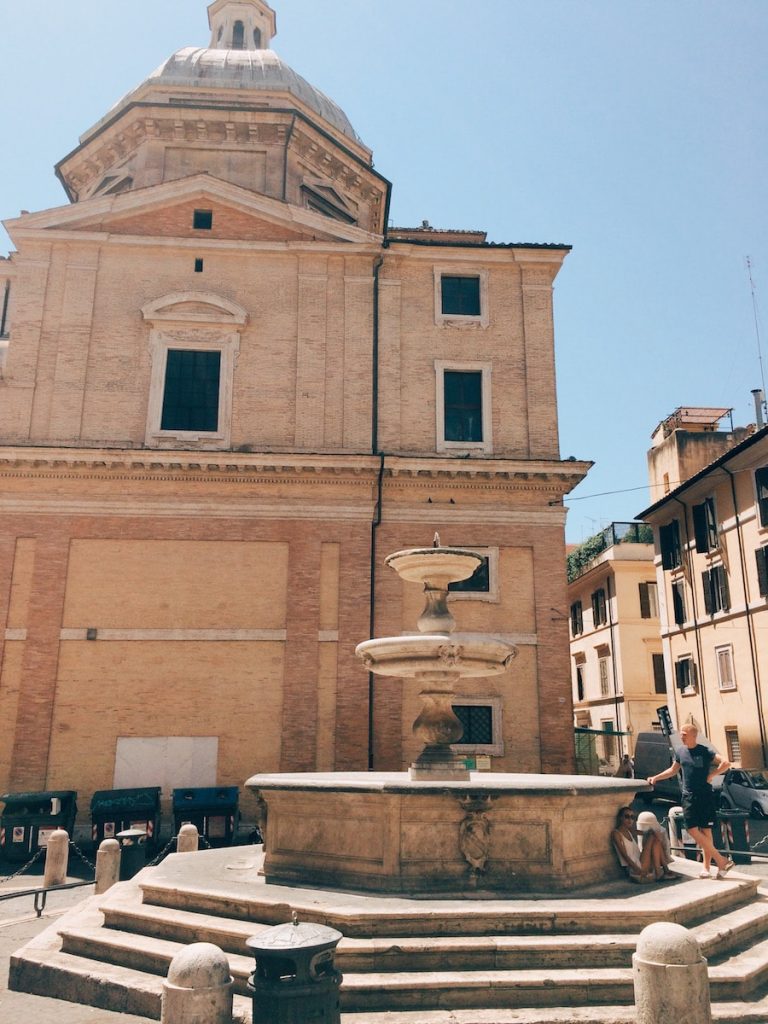 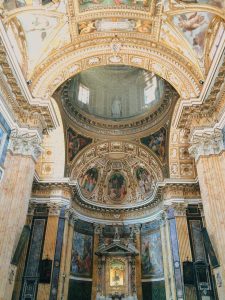 The church was built starting from 1580, following the architect Giacomo Della Porta’s design.

The travertine façade derives from that one of the chiesa del SS. Nome di Gesù, major temple of the religious order of the Jesuits in Rome, designed a few years before by Giacomo Della Porta himself and Jacopo Barozzi da Vignola.

The church interior is also inspired by the chiesa del Gesù on a smaller scale and it is embellished with frescoes painted by various artists between the 80s and 90s of the 16th century, during the Counter-Reformation period, and showcases some early angelic depictions by the painter who soon after become one of the most original and gifted caravaggesque interpreters: the refined Orazio Gentileschi. 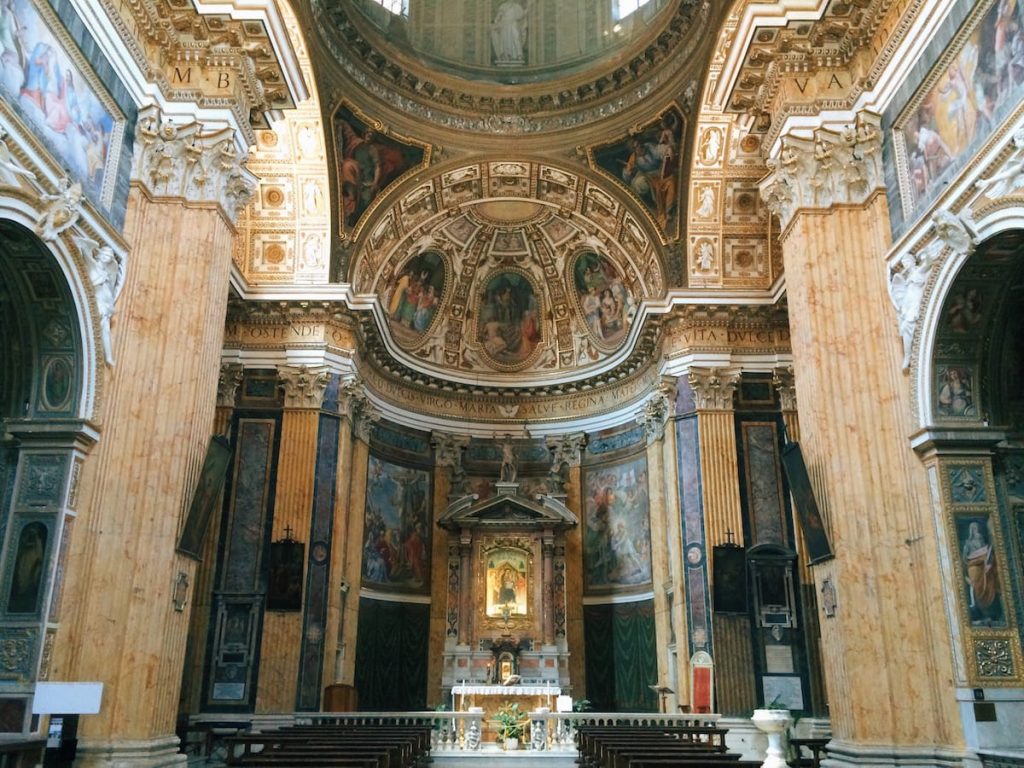 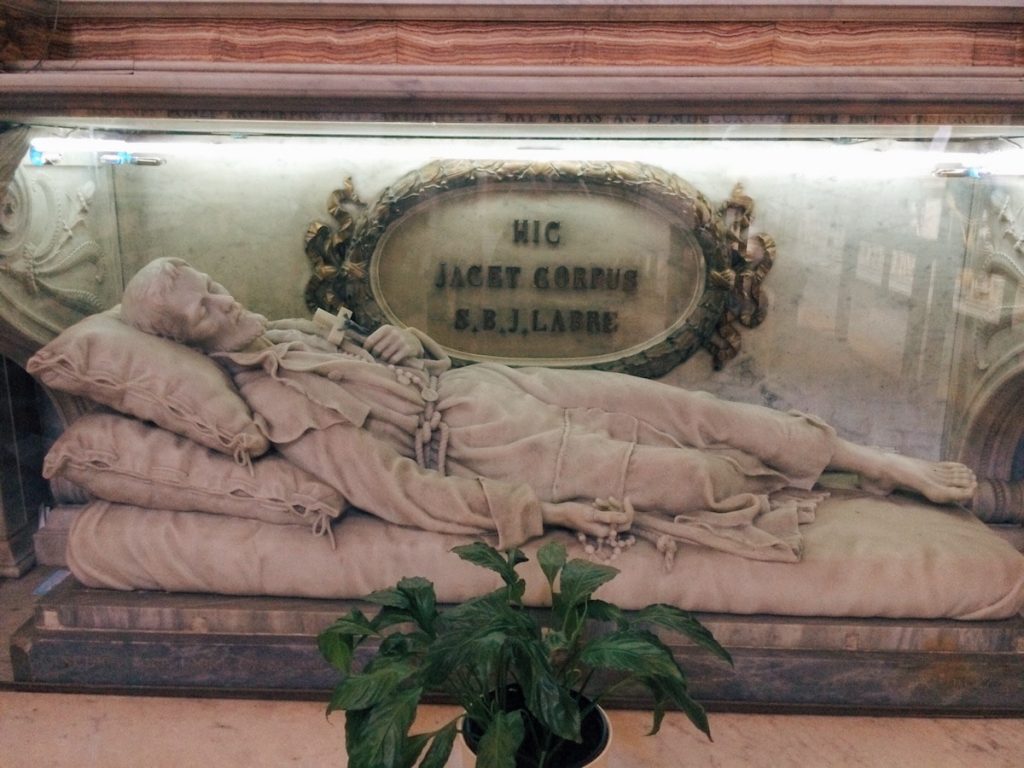 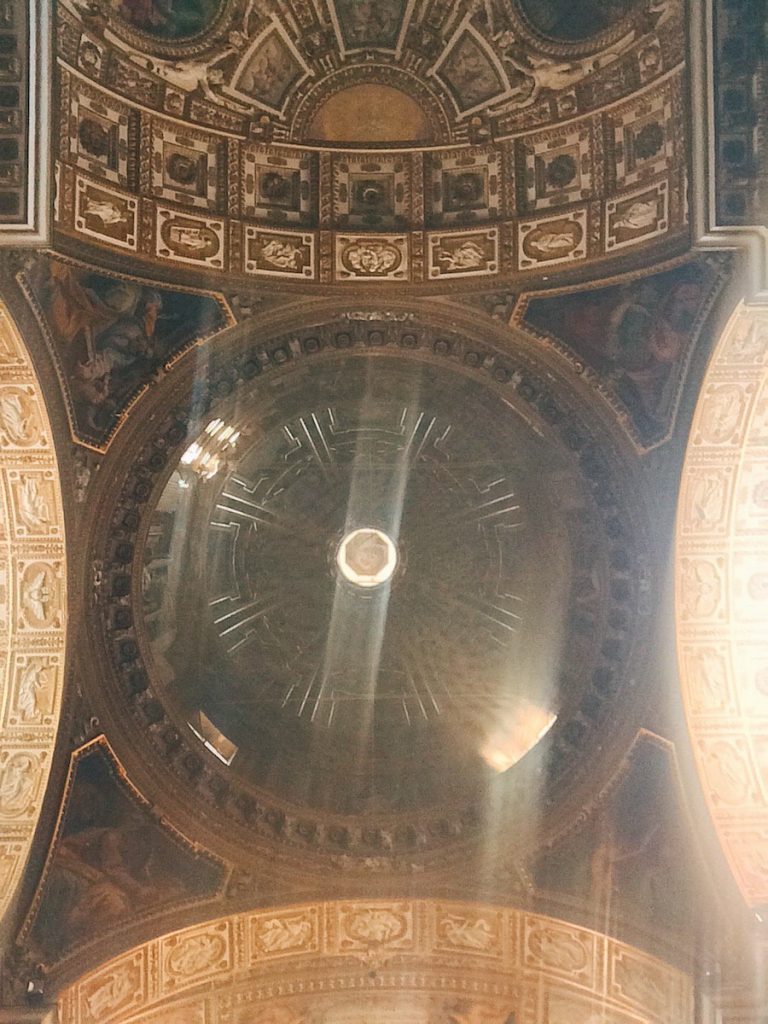 Dome interior of chiesa di Santa Maria ai Monti, Rome. The dome is divided in eight slices and it is frescoed by Cesare Nebbia and Orazio Gentileschi (1599-1600). 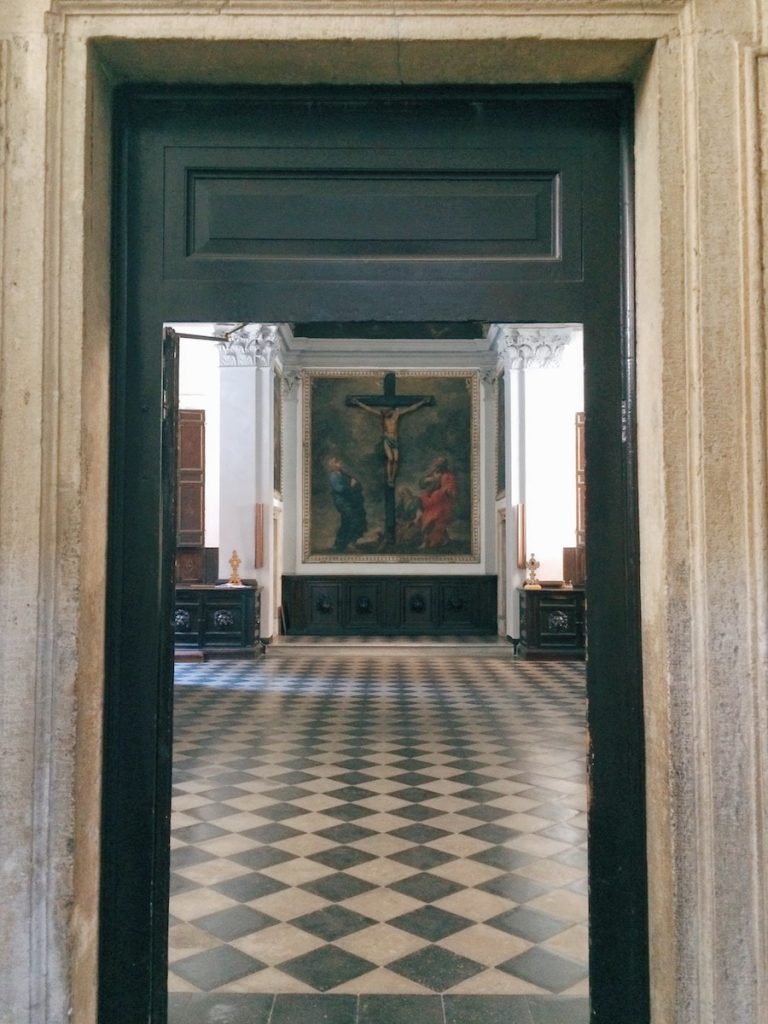 Sacristy of chiesa di Santa Maria ai Monti, Rome. The original furniture dates to the 17th century and an elegant laver dating to the end of the 16th century is present. 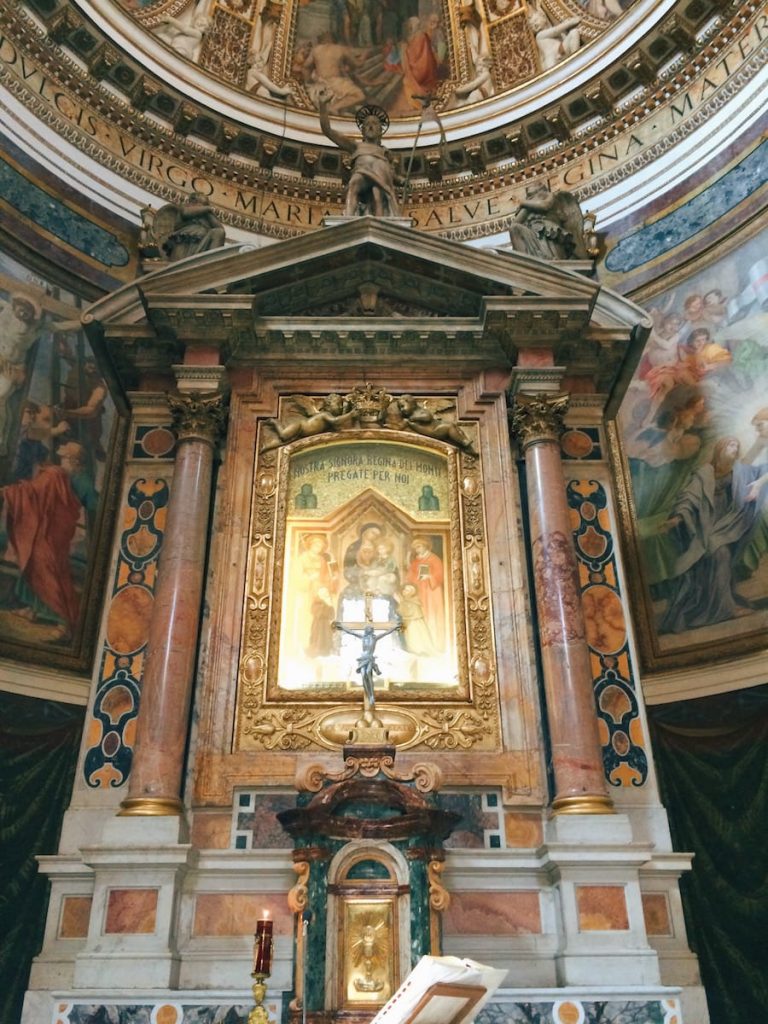 A poem on the Colosseum by Edgar ...