In a short time around the mid-19th century, one of the greatest art collections in Rome was gathered at the Monte di Pietà institution. Following an initiative put forward by its director-in-chief, the marquis Giovanni Pietro Campana, the ancient pawnbroking establishment oddly began to accept artworks as guarantee for cash loans. Avid collector and art enthusiast, the marquis Campana also developed a rich private museum in a dangerous balance between personal interests and obfuscated loans, but his eager ambitions led him to an infamous ending.

The marquis Campana and his private museum 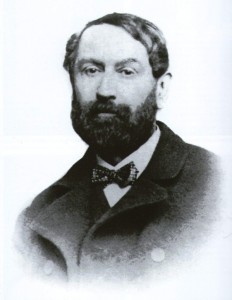 Giovanni Pietro Campana (Rome, 1808- Rome, 1880) was born in a noble family hailing from the Abruzzo region. In 1833 he was appointed as general director of the Monte di Pietà pawnshop, as his father and grandfather before him, who also bequeathed a true passion for Greek and Roman archaeology to him. Recognized as an esteemed expert, the marquis Campana went digging around Rome and began to collect his interesting finds. [1] Because of his cultural merits, in 1849 king Ferdinando II of Naples created him marquis of Cavelli. [2]

Over twenty years, the marquis Campana gathered one of the most renowned and huge private collections in Europe [3] [4], which included Greek and Roman artifacts and goldsmithing works; paintings of Italian primitives or dating mainly to the 17th-18th centuries; [3] Etruscan antiquities and jewellery; ancient coins, medals, bronzes and glasses, etc. [5] The various nucleuses belonging to the Campana collection were housed among his several Roman properties, like the Villa Campana or “Villetta Campana”, located along via San Giovanni in Laterano also known as “Stradone di San Giovanni” [6] and a palace in via del Babuino. [7]

The marquis Campana desired to create an exemplary museum dedicated to Italian art and, in order to exhibit the artworks at their best state, he didn’t hesitate to commission intense restoration works such as remakes and pastiches or assembly of different elements. [4] 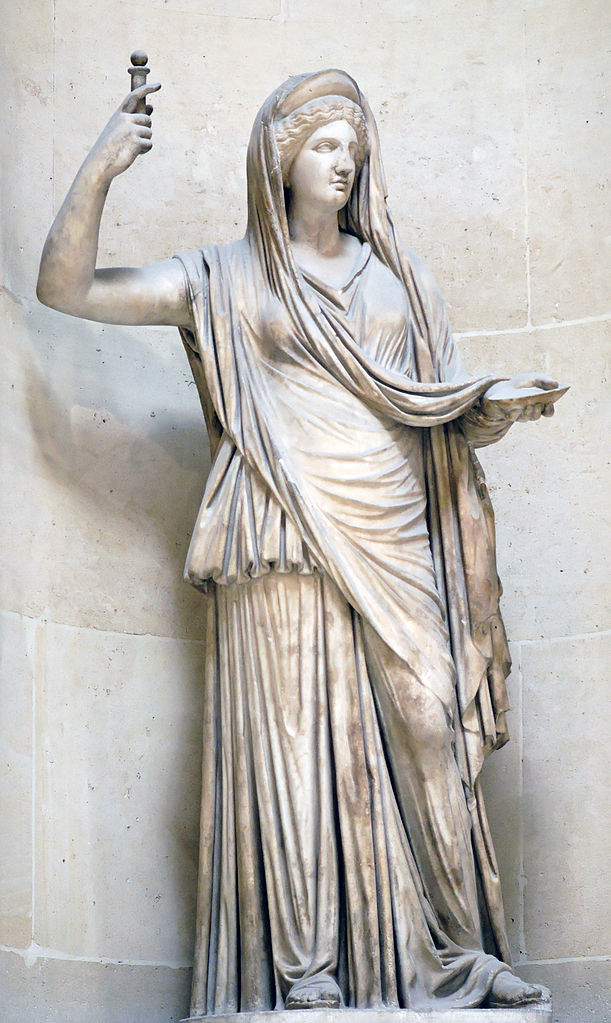 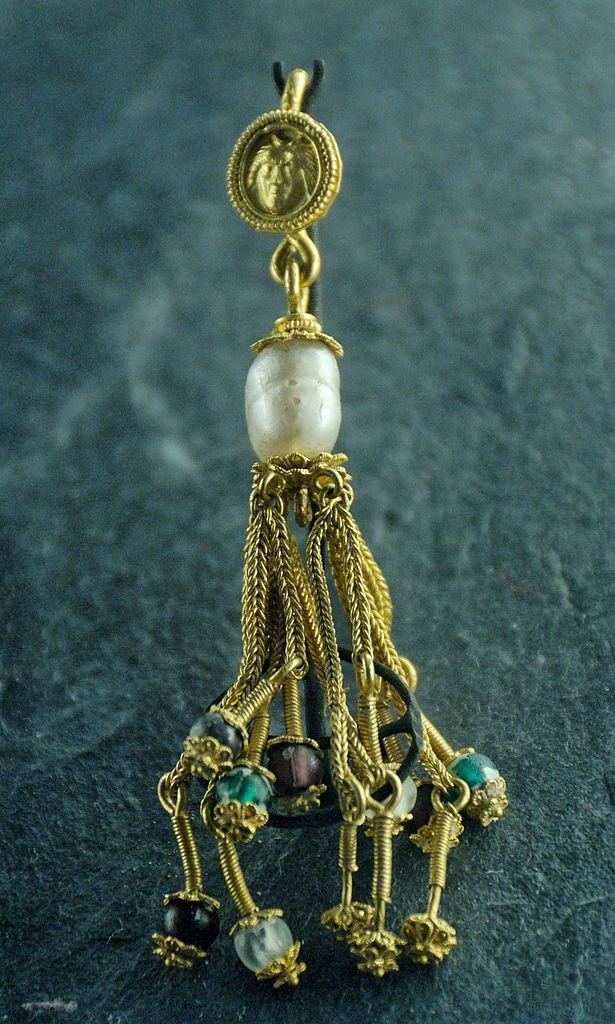 Origin of the collection at Monte di Pietà

In his own capacity as director of the Monte di Pietà, an ancient papal charitable trust involved in loans upon pawns, [8] the marquis Campana started a reform to allow the pawn of artworks. He promoted in fact the change of the existing statutory laws, which didn’t admit the deposit of this kind of objects, due to both the variability of their value and their irrelevance for the solidarity purposes of the institute, aimed at taking care of the poor people. These instructions issued by the marquis Campana were approved by the pontifical Government in 1849, that considered this new system as a possibly useful measure to refill the drained funds of the Papal State, reducing the devastating effects of the economic crisis. [3]

The new instructions caused a very quick influx of artworks that weren’t redeemed by their original owners on the expiration date or weren’t acquired anymore on the occasion of their new sale. The fine artworks gathered there mostly came from the collections of aristocratic families fallen in serious financial difficulties, following the political changes occurred in the first half of the 19th century like the French invasion of Rome, the 1848 revolutions and the Roman Republic. On the other hand, the altarpieces and fragments of polyptychs probably came from churches and convents, as the clergy was affected by confiscations. Also many art traders, antiquarians and collectors in Rome obtained money on loan in exchange for artworks, so the precious collection of artworks expanded, housed at the nearby palace formerly belonging to the Barberini family and then connected with an archway to the main palace in piazza del Monte di Pietà. In this way, the latter seat of the institution really became a sort of art gallery. [3]

Façade of the Palazzo del Monte di Pietà, designed by Ottaviano Mascherino in the late 16th century and later expanded by Carlo Maderno.

Some highlights from the painting collection at Monte di Pietà 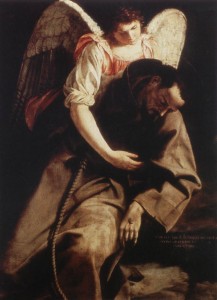 The art collection at Monte di Pietà can be deemed as so remarkable especially due to the exceptionally copious selection of masterpieces. Many paintings testify for the quality of the artworks, such as the “Saint Cecilia and the Angel” attributed to Carlo Saraceni, “Dying Saint Francesco sustained by Angel” painted by Orazio Gentileschi and “The dinner of the wealthy Epulon” by Mattia Preti. [3] 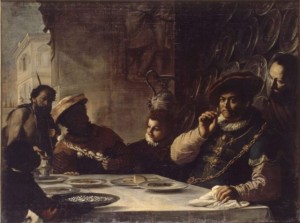 The provenance of most paintings is unknown because the registers relating to the objects entering the pawnshop have not been traced yet.

For some renowned artworks instead, it is possible to retrieve information from the historic inventories. For example, the “Amor sacro e Amor profano” by Giovanni Baglione came from the collection of the cardinal Benedetto Giustiniani. Moreover, almost nine paintings which ended up at the Galleria Nazionale d’Arte Antica came from the huge collection of the cardinal Joseph Fesch, uncle of Napoleon (traded in Rome between 1840 and 1845), like the two paintings by Valentin de Boulogne, “Expulsion of the Money-Changers from the Temple” and “Last Supper”. [3] 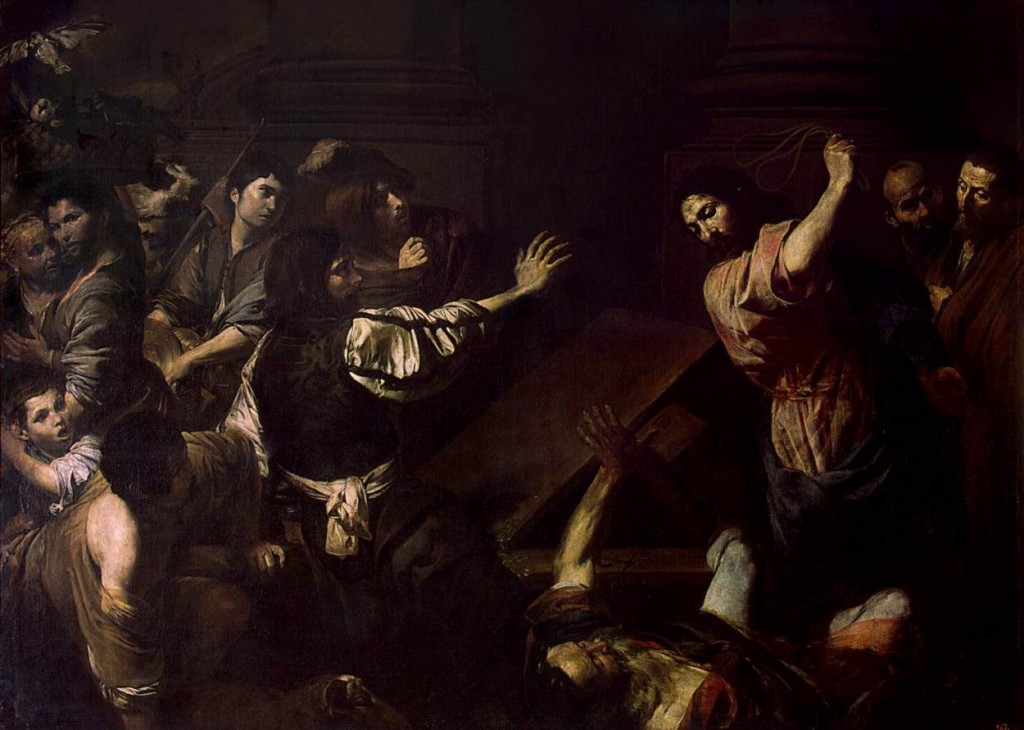 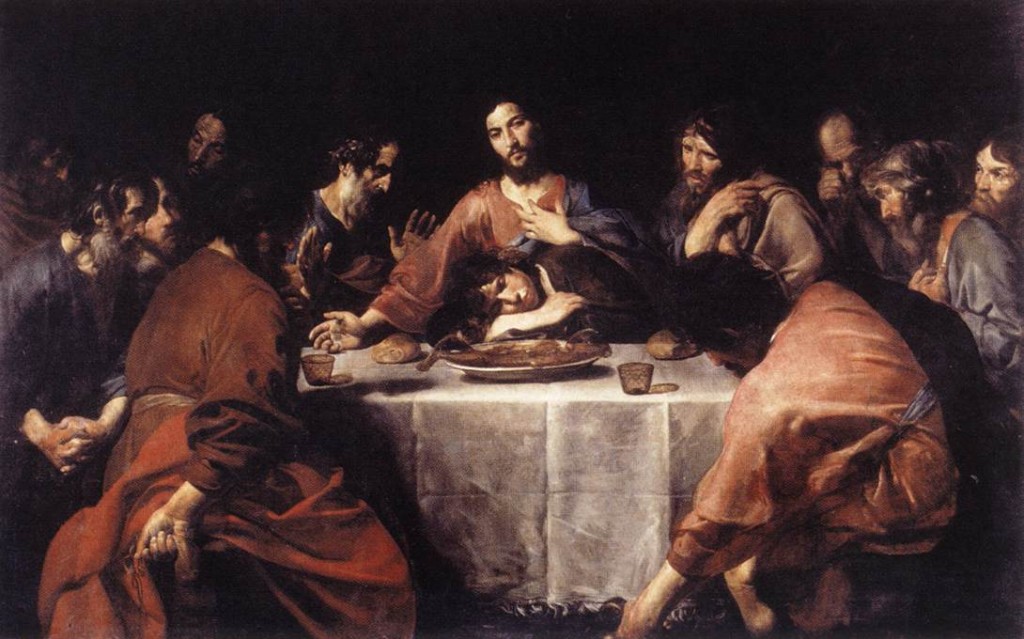 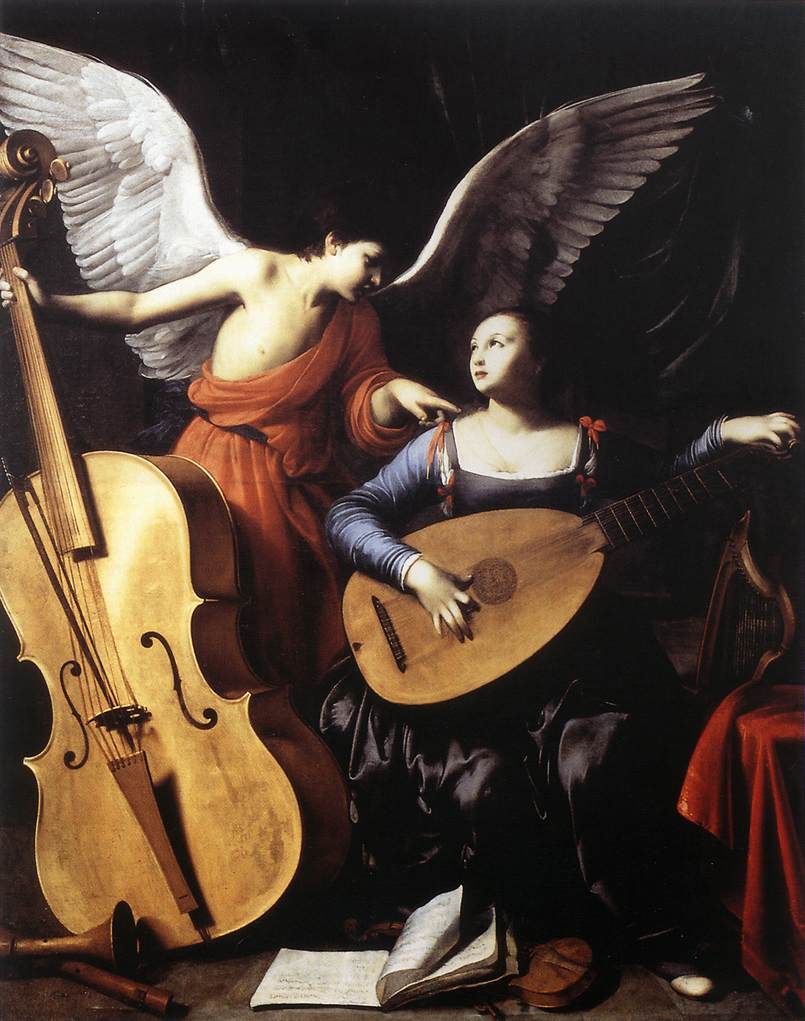 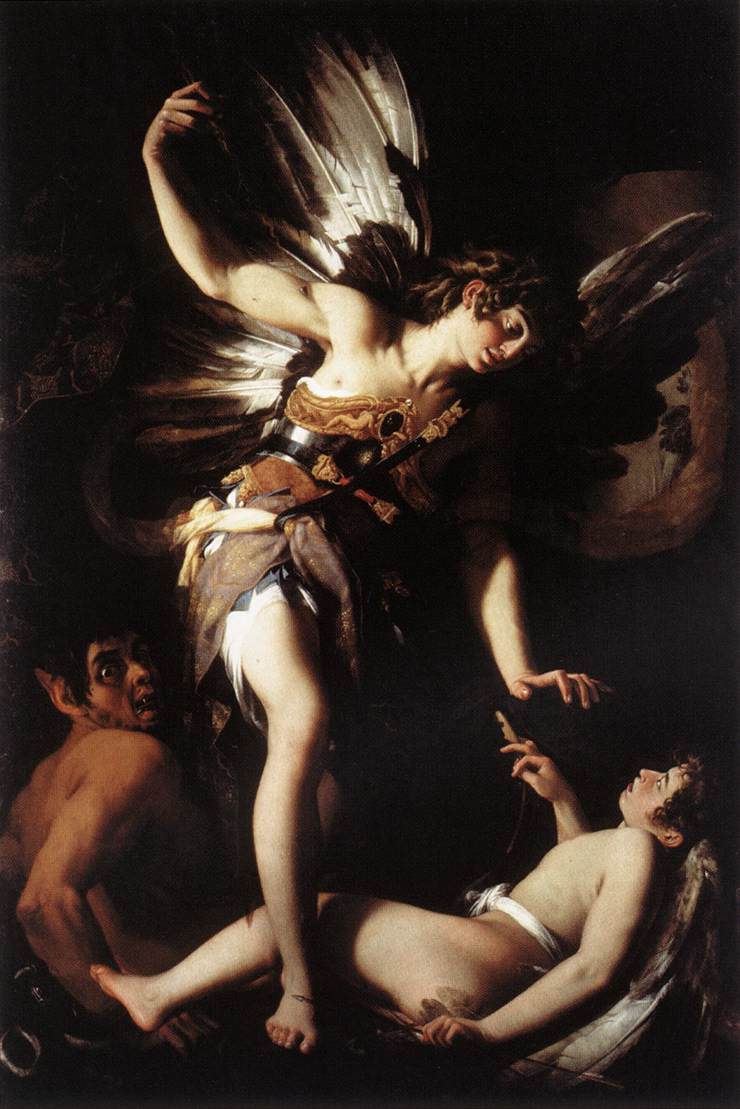 The clock under the belfry, added at the end of the 18th century on the façade of the Palazzo del Monte di Pietà.

The leading role played by the marquis Campana at the Monte di Pietà represented the ideal opportunity to enrich his private collection but, in the meantime, his responsibilities threatened his personal assets. [3] The marquis Campana’s finances were shaky, so he pawned his collection in order to take several loans of money. [1] After about ten years spent in a nebulous situation of deals and speculations as exchanges between the institute loans and the marquis’ private collection, the most serious deficit of that time emerged in the financial balance of Monte di Pietà. [3] 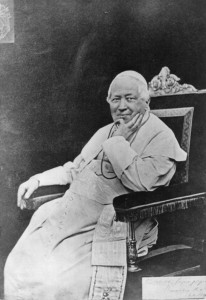 In 1857 the marquis Campana was charged with the embezzlement of a huge amount of money from the pawnshop aimed at increasing his private art collection. [3] He incurred debt for almost one million of Roman “scudi”. [1] Later in 1871, the baron Alessandro d’Emarese, commissioner for the temporary administration of the Monte di Pietà, wrote that the marquis Campana also granted much more money on loan in comparison with the value of the pawned artworks; according to him, that was the reason why many artworks weren’t redeemed anymore. [3]

The marquis Campana fell into discredit [9] and he was arrested and sentenced to 20 years' imprisonment. [3] The arrest was announced in the December 1857 issue of the Journal des Débats, followed by a lively and disconcerted reaction to the Campana scandal in Rome. [10] In 1859 Pio IX commuted the sentence into exile from the Papal State, in exchange for the divestiture of the marquis Campana’s whole assets to the Government. [3] Around 1858 the rich catalogues of the Museo Campana were also published. [11]

The marquis Campana came back in Rome in 1870 but he died in 1880 before the first judicial hearing of a new process claimed for years. [1]

Dispersion of both Campana’s and Monte di Pietà’s collections 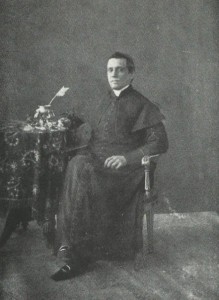 The project initially suggested to create a museum where to exhibit the Campana collection wasn’t carried out and the secretary of state cardinal Giacomo Antonelli firmly approved the sale of the collection, officially to delete the memory of the marquis Campana yet probably to refill above all the funds of the Papal State. This decision was allowed even if the pontifical laws forbade the artistic properties to leak out of the territory. The sale also affected the holdings of collectors who had either obtained particular treatments from the marquis Campana or had incurred debts with the pawnshop. [3]

Starting from 1859, the Campana’s private collection was quickly dispersed, firstly during the declining Papal State era, then with the new Italian State. The sale of the Campana collection represented one of the most remarkable events happened in the art market at that time, involving art scholars and leading exponents of connoisseurship, such as Giovan Battista Cavalcaselle, who carried out several evaluations aimed at the acquisition of notable artworks also on behalf of Charles Eastlake, director of the National Gallery in London. [3] 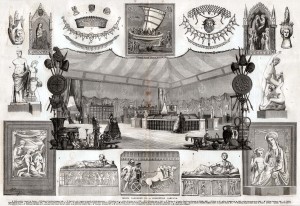 Engraving of the Campana collection at the Louvre Museum, ca. 1861.

Most of the Campana collection of artworks and antiquities is now exhibited at the Musée du Louvre while some objects are held in other French museums and at the Hermitage. [3] The representatives of the Russian zar partially acquired the Museo Campana in 1861 [12] whereas the French government acquired a part of the collection between 1861 and 1863. Some of the antiquities were set up in the galleries at the south wing of the Cour Carrée while the collection of the primitives was displayed at the Musée du Petit Palais in Avignon. [4] Only some artworks remained in Italy, like the goldsmithing nucleus acquired in 1873 by the city of Rome and now housed at the coin cabinet of the Musei Capitolini. [3]

Meanwhile, the Monte di Pietà suffered a serious repercussion following the Campana affair and the art collection gathered there was gradually impoverished on the occasion of several auction sales, organized to recover part of the debts. The collection at Monte di Pietà thus became the attractive source for rich travelers, connoisseurs and collectors, also coming from abroad, who didn’t miss the opportunity to take possession of most of the precious artworks. Nevertheless, the Accademia di San Luca had preemption on the holdings, in case they would have deemed specific artworks as valuable for artistic training. In December 1857, the printed catalogue featuring 2890 paintings, sculptures and other artworks was published according to the counsel of the Accademia di San Luca, the most influent academy of artists in Rome. 1847 items were also presented along with the estimated values because they were the only remained objects on sale, being a part of them already redeemed or sold. Moreover, the dispersion of the artworks belonging to the so-called Galleria del Monte di Pietà worsened because, in order to plunge the prices, some profiteers spread the word about the supposed inaccuracy of the evaluations made with dishonesty and the lacking quality of the collection, considered to include the rejected objects formerly belonging to the marquis Campana’s private museum. [3] 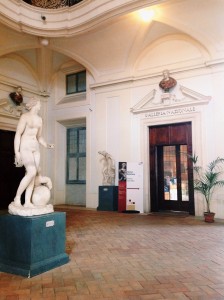 The entrance hall of the Galleria Nazionale d'Arte Antica in Palazzo Corsini.

Here’s however the words of appreciation coming from the pages of the Art Journal, reporting the announce of an artworks sale scheduled for November 1875: “[…] the halls of the Pietà were soon filled with a large collection of pictures, statuary, mosaics, intaglios, etc., although none but select and carefully-tested works were accepted.” [13]

Through troubled vicissitudes, a little selected portion of that valuable collection was however saved from the dispersion and destined to constitute a significant nucleus of paintings belonging to the national painting gallery of Rome, named “Galleria Nazionale d’Arte Antica” and then extended between the two seats of Palazzo Corsini and Palazzo Barberini, acquired by the state as inalienable part of Italian cultural heritage. [3]

Palazzo Barberini was purchased in 1949 by the Italian State in order to house the Galleria Nazionale d’Arte Antica. The central sector of the 17th century façade, designed by Gian Lorenzo Bernini, is classically articulated by three orders of arcades.

[5]      John Murray and Octavian Blewitt, Handbook for Travellers in Central Italy: Including the Papal States, Rome, and the Cities of Eturia with a Traveling Map. London, Florence, Paris: J. Murray and son, 1843. Online [accessed October 2015].

A never built Trevi Fountain: the ...