The artist Nicola Filotesio, called "Cola dell'Amatrice", was possibly born on the 9th of September in an undefined year (various records report the years 1480 or 1489) at Filetta, a hamlet near Amatrice in the Papal State. Painter, architect and sculptor, Filotesio drew inspiration from the 14th-15th century culture of Umbro-Roman school added to some elements from the Abruzzese painting. 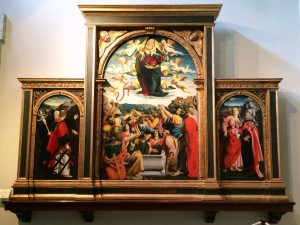 Pupil of Dionisio Cappelli, Nicola Filotesio was mostly active nearby Ascoli Piceno and he has been also considered to have influenced the spread of Raphael’s art in the smaller sites of central Italy. In fact, he probably came to Rome around 1513 and worked for the cardinal Raffaele Riario. A few of his paintings are now conserved in Rome.

The Assumption of the Virgin was signed by Filotesio in 1515. The altarpiece comes from the chiesa di San Salvatore in Aso and it was also conserved at the Collegiata di San Paolo at Force in the Marche region before the current display at the Pinacoteca Vaticana. This polyptych was originally composed of eight compartments that went lost or dispersed and only two of those pieces, depicting Saints Benedetto, Lorenzo, Maria Maddalena and Scolastica, are displayed at both sides of the central panel.

The tragic story of Beatrice Cenci