On the 3rd September 590, Gregorio Anici was elected as pope Gregorio I. Also known as Saint Gregory the Great, his firm figure is linked to the ancient legend of the vision of the Archangel Michael, believed to be rooted to the origin of Castel Sant’Angelo name.

Born in a wealthy family of the 6th century Rome, Gregorio Anici was elected as praefectus urbi Romae and then joined monastic life, before being called to the Pontificate.

Also known as Saint Gregory the Great, pope Gregorio is venerated by both Catholic and Orthodox churches. Deemed as a Doctor of the Church, he was responsible for liturgical reforms, learned author of various writings like patristic works and sermons and active in the delicate political connections between the Longobards and the Byzantine Empire. Moreover, the mainstream form of sacred plainchant belonging to the Western church tradition was attributed to him and thus called "Gregorian chant". 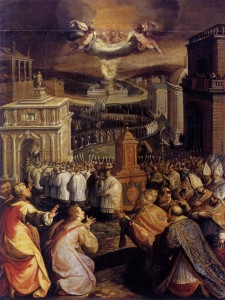 During the difficult winter between 589 and 590, the Tiber river flooded the city of Rome, causing victims and extensive damages, followed by a violent plague that struck even the pope Pelagio II. Since the dramatic situation showed no evident sign of stopping, on the 29th of August 590 Gregorio, as successor of pope Pelagio II, encouraged the people of Rome to the prayer and penitence with faith in the hope of ceasing the pestilence. He then ordered for the three following days a solemn procession with the ancient icon depicting the Virgin Mary with Child from the basilica di Santa Maria Maggiore (learn about the miracle of the snow at the root of its building). According to the ancient tradition, Gregorio had the angelic vision while he was crossing the bridge of Hadrian (pons Aelius or pons Hadriani), at the head of the penitents’ procession, on the way to the basilica di San Pietro. Gregorio beheld together with other participants the Archangel Michael standing atop the Mausoleum of Hadrian, in the act of wiping a flaming sword and returning it to its sheath. Gregorio interpreted this as a sign that the plague was about to cease as indeed happened.

A late 16th century painting by Jacopo Zucchi, on display at the Pinacoteca Vaticana, represents the procession of Gregory and the miraculous apparition of the Archangel.

The name of Castel Sant'Angelo

Since at least the 10th century, the Mausoleum of Hadrian has been called Castel Sant’Angelo (Castel of the Holy Angel) and the figure of an angel has crowned its summit, in memory of pope Gregorio’s vision. The present statue is a mid-18th century bronze artwork by Peter Anton von Verschaffelt and it has replaced the previous sculptures that were destroyed or went lost. 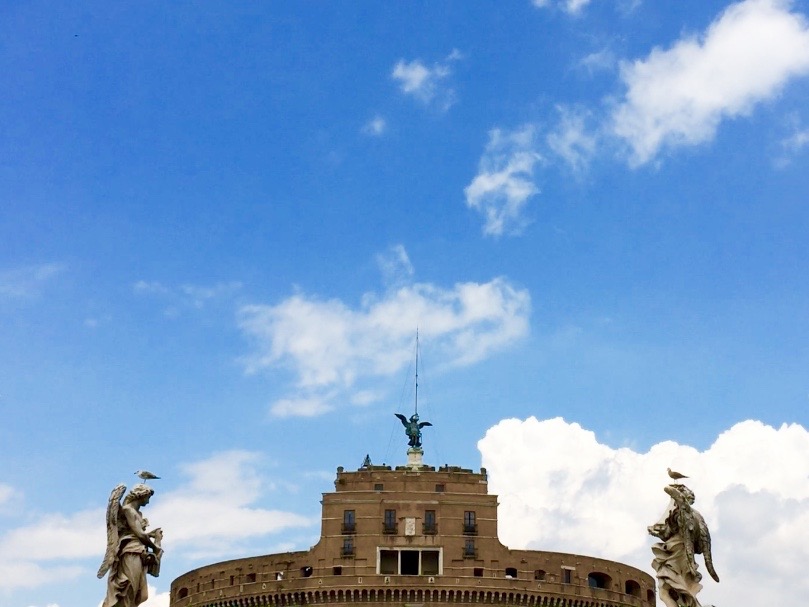