The Lion attacking a Horse is currently settled in the Exedra of Marcus Aurelius at the Musei Capitolini. Why is this sculpture in a so important location, right next to the original equestrian statue of Marcus Aurelius itself? The monumental marble sculpture actually worked as the iconic symbol of municipal Rome. So let’s discover the story of this artwork and why its deep connection with the city of Rome has been mostly forgotten for centuries. 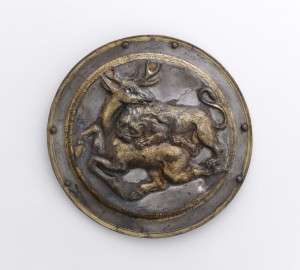 Phalera with Relief of Lion Attacking a Stag, Near East, Parthia, 2nd century BC, silver with gilding (9 x 12.6) cm, The Getty Villa.

The masterpiece depicts a scared stallion collapsing under a wild feline that violently bites the prey’s body. The powerful theme of this artwork is a contrast between noble animals and so an emblem of victory and vanquish. Widely known to date back to the early Hellenism, around the late 4th century BC, [1] the style of the group sculpture seems well to correspond to a period characterized by more naturalistic representations in Greek art, aimed at deeply expressing pathos and freed dynamism, through renewed esthetic forms and compositions. [2]

The evaluation of the subject and the style brings to the consideration that the animal group was possibly created as a commemorative monument in northern Greece or Asia Minor, after Alexander the Great’s conquest of the Achaemenid Empire. [1] The motif of leonine predation was rooted in the figurative tradition of Persia as well as oriental monarchies and Alexander’s feats inspired the widespread of wild animals hunting scenes in the Hellenistic art productions like mosaics and funerary reliefs. [3] Between the 2nd and the 1st century BC, Rome broadened its power, taking possession of the riches and many worthy works of art created by Classical Greek and Hellenistic culture. [4] Plausibly under a similar circumstance, the Lion Attacking a Horse was carried to Rome as a victory booty. [1]

The re-finding in Rome

The recognition of a stream bed below the Palatine Hill as the supposed find spot has contributed to the assumption that the sculpture was on view in the Circus Maximus where theatrical hunts to wild animals besides chariot races were performed. The animal group would have installed in an eye-catching location until the impressive stadium was disused after the mid-6th century AD. [1] According to Vincenzo Rossi’s statement instead, reported by his pupil Flaminio Vacca in his Memories of various antiquities found in different places of Rome, the sculpture was found in the “marrana della Caffarella” (the ancient Almone ditch) outside porta San Paolo, during the pontificate of Paolo III (1534-1549), [5] but this evidence has been considered a false hearsay. [6] Different information can be found in the repository record of the Musei Capitolini collection, registered in 2008. The sculpture was classified as dating to the Roman period and its material was recognized as “Lunense marble” (Carrara marble from the porto di Luni). The find spot was located on the same Capitoline hill and identified with the complex of Santa Maria in Aracoeli in the homonym piazza, [7] that served as municipal hall where the civic councilors gathered before the nearby building of the Palazzo Senatorio in the piazza del Campidoglio. [8]

In any case, the Lion Attacking a Horse survived the Early Mediaeval period until it appeared at a not yet clarified time on the Capitoline Hill, the city’s ancient religious center and seat of the civic administration. It however passed through these centuries in a fragmentary form: only the equine torso and the feline foreparts were remained, as shown by Giovanni Battista de’ Cavalieri’s engraving. [9] 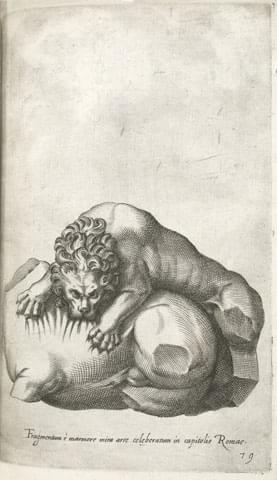 The earliest notices of its presence in the piazza del Campidoglio, so far, date to the 14th century, when the sculpture was significantly set on the staircase of the Palazzo Senatorio, in an appropriate location because it was clearly visible from the whole piazza. [6] The animal group is probably claimed in connection with some tragic episodes from the life of the tribune Cola di Rienzo, written by a contemporary anonymous. Around 1347, the noble Martino Stefaneschi was compelled to kneel down the stairs in the place near “the lion”, where he heard his sentence to death, as Fra Monreale in 1354 and Cola di Rienzo himself, a short time later. [10] It’s perhaps the same sculpture which is also mentioned in the Statute of the city of Rome dating to 1363 and which is still described on the staircase of the “great justice” in the sixty-fourth stanza of the Antiquarie Prospettiche Romane, an anonymous Renaissance incunabulum dated between 1499 and 1500 (transcript). Palazzo Senatorio was also called, in fact, Palatium iustitiae. The “place of the lion”, or the locus iustitiae [11] was thus a symbolic area on that staircase, very important for Roman people, where the justice sentences were usually divulged. This tradition probably dates back to a time even prior to Cola di Rienzo’s fortunes, as soon as around the 1300 when, on the occasion of the building of the loggia and maybe also of the staircase of the Capitoline palace, the senators added an opus marmoreum which it could be identified with the group sculpture. [6]

In the History of the Capitoline collection of antiquities up to the inauguration of the museum, Michaelis intended to retrace the story of this group sculpture, starting from the study of some sketches by Maerten van Heemskerck. One of these, the folio 61, depicts an interesting view of the Campidoglio from the inferior loggia of the Palazzo dei Conservatori and it can be connected to the Roman stay of the Dutch artist, dating within the 1530s, before the piazza would have been involved by Michelangelo’s interventions. This sketch already shows the well recognizable fragmentary group accommodated on the staircase of the Palazzo Senatorio, on the side of its balustrade oriented towards the Aracoeli. [6] 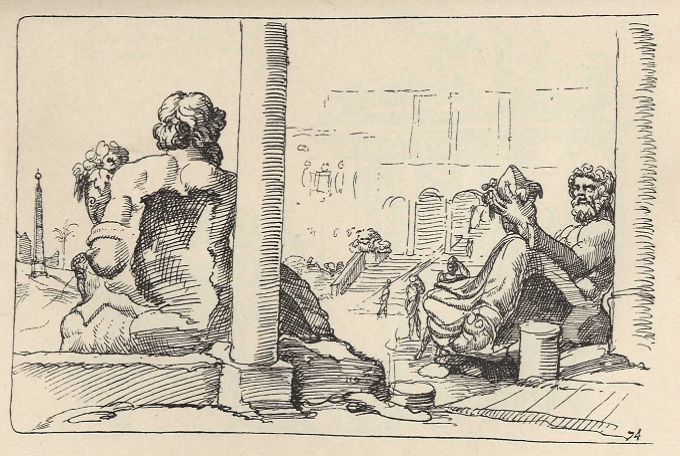 Facsimile of Maerten van Heemskerck, View of the Campidoglio from the inferior loggia of the Palazzo dei Conservatori, 1533-1535, folio 61. [6]

The symbol of municipal Rome

The choice of an Ancient artwork in such civic symbolization is very meaningful. In the heart of Rome’s municipality, the sculpture was the tangible witness of the Roman illustrious past and the strength of the allegory of the civic “good government” (Buongoverno) as well as the probable allusion to the justice enforcement lied in the feline figure dominating the noble equine. The lion was used, in fact, to symbolize the “majesty of the Roman People” [12], also in the numismatic production, as depicted on a 13th century denarius.

Cola di Rienzo himself wrote that “the walls of Rome are built almost lion-shaped”. [13] The Ancient artwork marked moreover an historic connection with the earlier Middle Age period, when the sentences were declared and the convicted were executed in front of the She-wolf bronze sculpture, symbol of justice at the campus Lateranensis. [6] In 1471, pope Sisto IV decided to move the She-wolf to the keeping of the Conservators together with other three ancient bronzes which were so far conserved in or in front of the Patriarchio lateranense. The She-wolf was set on the Palazzo dei Conservatori façade, above the entrance, as showed by Heemskerck’s sketch conserved in Berlin. [14] The honorable location of the She-wolf was assimilated in the papal intent to replace the lion as the iconic symbol of Rome, a substitution that has endured up to the present. [13]

As reported by several authors, Michelangelo Buonarroti harbored a great admiration and “raised unceasing praises for this wonderful work”. [15] [16] [17] On the occasion of the overall urban plan for the piazza del Campidoglio, proposed by pope Paolo III Farnese and designed by Michelangelo between 1536 and 1546, the medieval Palazzo Senatorio was devised to be restored also with a double outer stairway, fulfilled around the mid-16th century. Starting from that time, the Lion attacking a Horse was arranged in different locations on the Capitoline Hill until the XX century. Aldrovandi nevertheless described the fragmentary sculpture still in the piazza del Campidoglio in his treatise on the ancient statues in Rome published in 1556. [15] 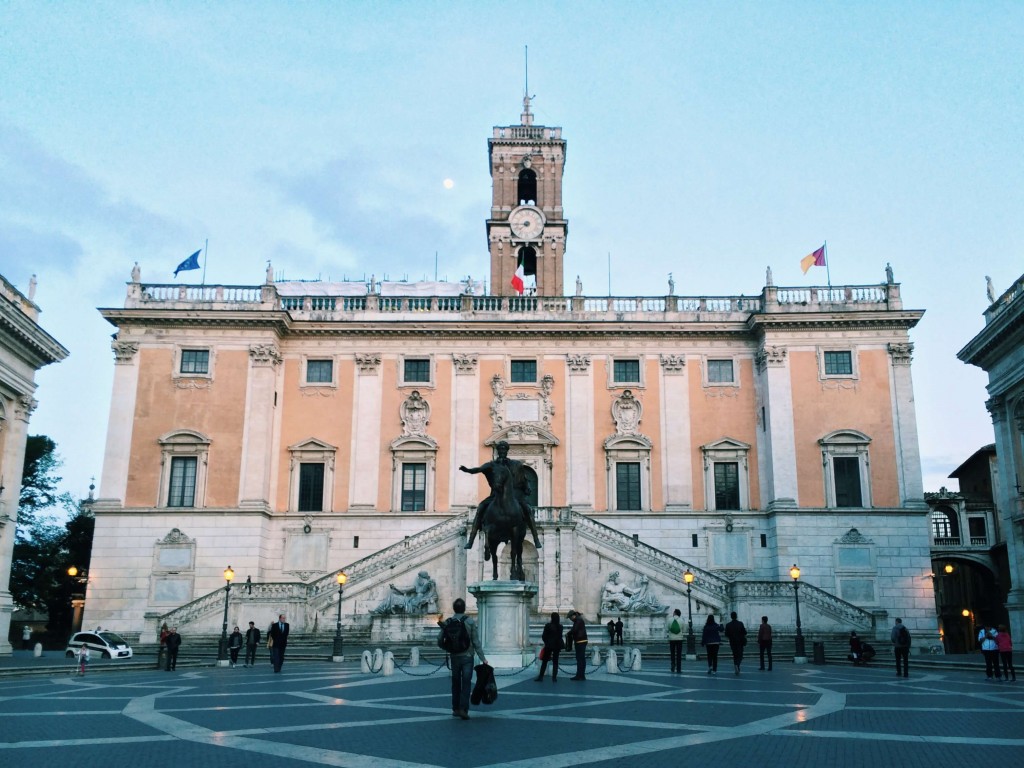 Palazzo Senatorio in Rome, at present. Following Michelangelo’s project with some variations, the façade was completed in 1605 under the direction of Giacomo Della Porta and the whole palace was fulfilled later in that century.

In 1594, following the restoration approach of that time, Ruggero Bascapè added various figurative parts: the head, the legs and the tail of the horse, as well as the rear limbs of the lion. Around this time, the group sculpture was moved in the Palazzo dei Conservatori courtyard, where it was depicted in a mid-17th century drawing by Stefano della Bella and described on a big travertine pedestal in the inventory of the goods housed in that palace, dating to 1692 [18], and then cited by the Richardson’s [16] and Bracci [17] in the 18th century, as well as Tofanelli in 1840. [19] 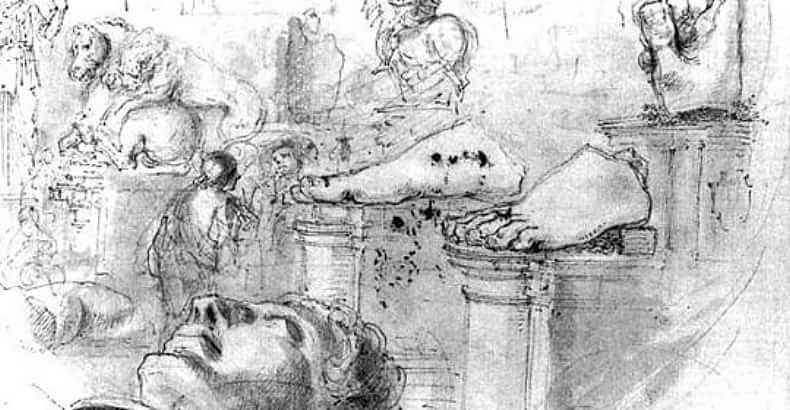 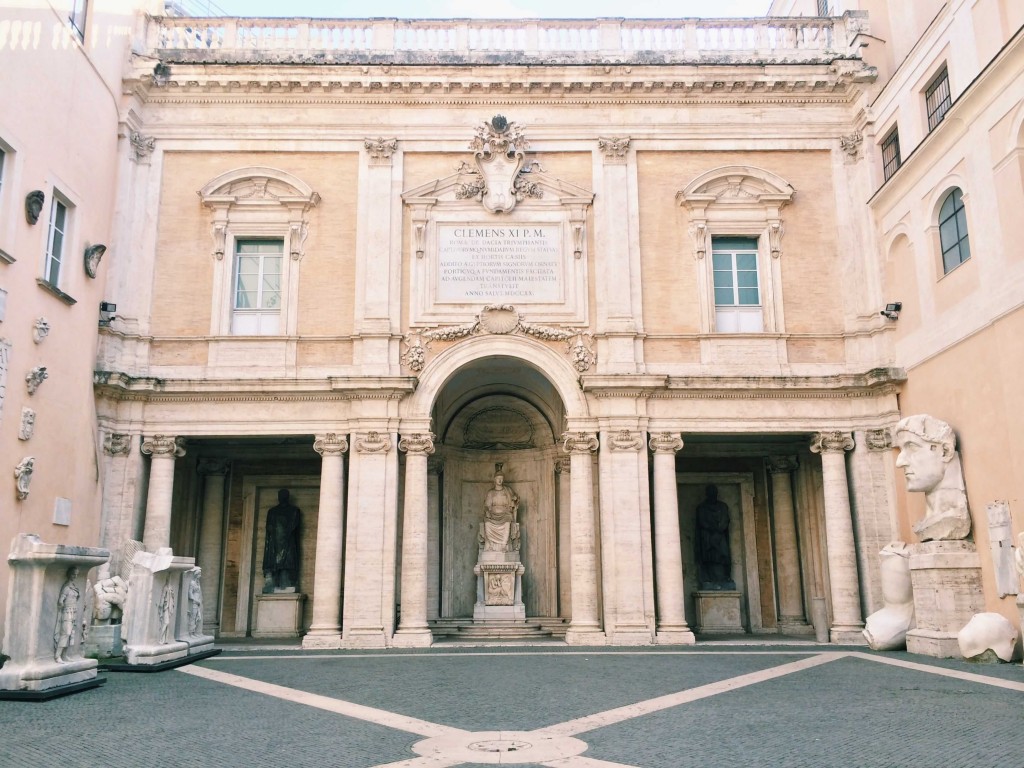 Courtyard of the Palazzo dei Conservatori in Rome, at present.

According to the repository record of the Musei Capitolini collection, the sculpture was then moved, firstly in the open space of the Giardino Romano (possibly between the second half of the 19th century and the 20th century) and only starting from 1981 it was registered as a decoration for the circular fountain at the center of the Caffarelli Garden, behind the Palazzo dei Conservatori, where it stayed until 2008. [7]

Around 1978, some restoration interventions were performed on the sculpture by Ignazio Di Bella yet in 2012 the Musei Capitolini supervised a whole conservation project for the sculpture, which included the analysis of the ancient manufacture and the recognition of the modern interventions, the consolidation of the fractures and the cleaning of the stone. Then this fascinating work of art undertook the very first journey outside Rome in over two thousand years: a video documents the spectacular arrival and installation of the sculpture at the Getty Villa in Malibu, where it was exhibited between August 10, 2012 and May 6, 2013, before to come back home. [1] The Lion attacking a Horse has definitively achieved its valuable location in the bright Exedra of Marcus Aurelius, designed by Carlo Aymonino in the 1990s, in order to cover the open space of the so-called “Giardino Romano” at the Palazzo dei Conservatori and to offer a safer and worthy setting for the remains of the Temple of Jupiter Capitolinus as well as the significant bronze sculptures belonging to the Musei Capitolini collection. 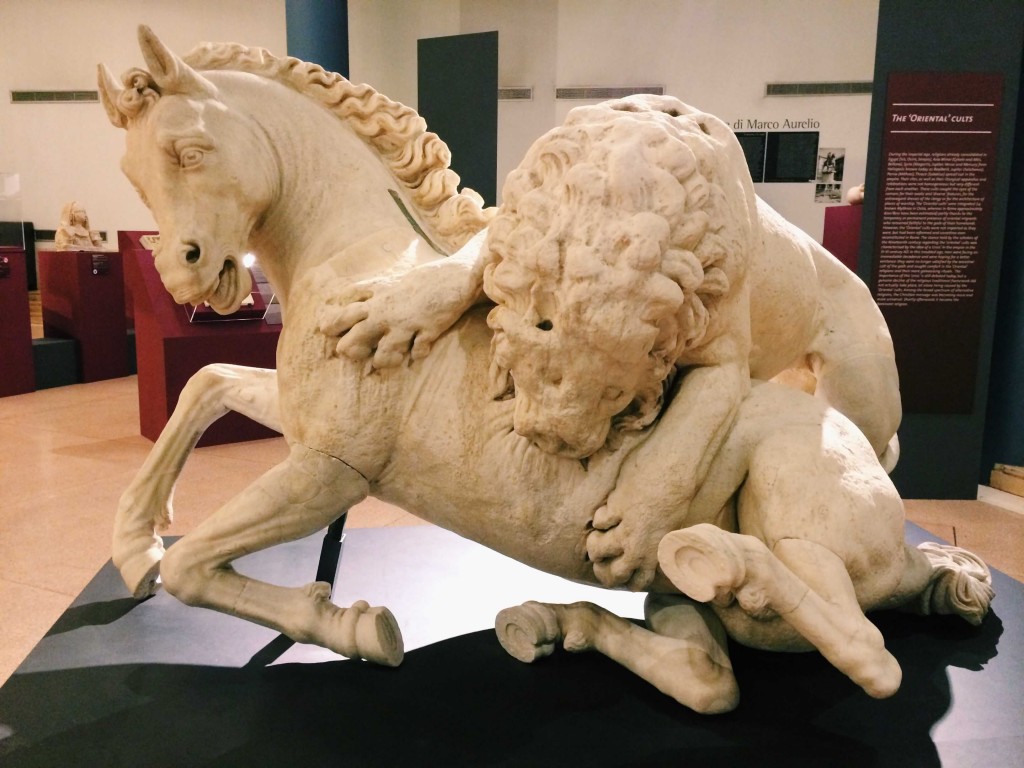